Unique bookstore helps people explore how to be more human : Publisher opens space in central Seoul for creativity and exploration to flourish

Unique bookstore helps people explore how to be more human : Publisher opens space in central Seoul for creativity and exploration to flourish 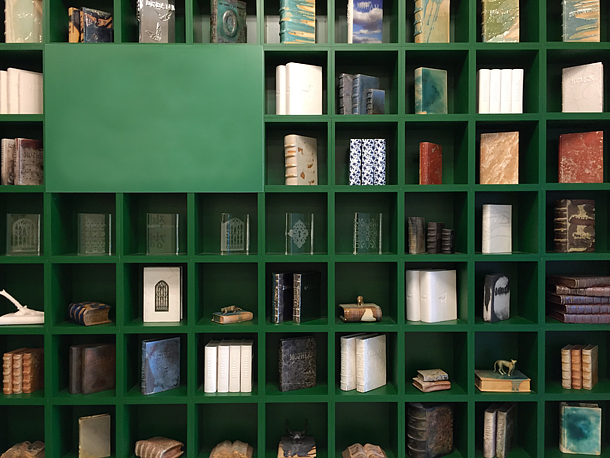 A display of items shaped like books made with either porcelain, iron or crystal at the entrance of Sunhwa Dongcheon, a bookstore opened by Hangilsa Publishing. [LEE SUN-MIN]

An effort to make books available to as many people as possible brought Hangilsa Publishing to a neighborhood heavy with offices in central Seoul. Their new bookstore, called Sunhwa Dongcheon, located in the retail space of an apartment complex in Sunhwa-dong, Jung District, could not be more accessible. 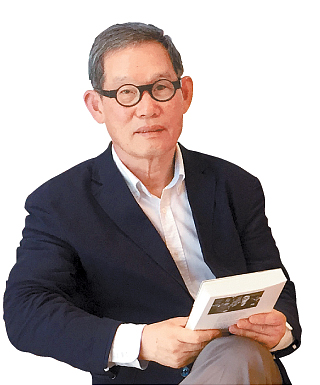 At major bookstores like Kyobo Book or YP Books, hundreds of people vie for a spot to read or search for practical how-to books among many others. Here, one can only find books in the field of the humanities including philosophy, literature, arts and history, published by the company.

“Dongcheon means utopia, and here in the bookstore we try to [be surrounded by] all kinds of thoughts [that can take people to utopia,]” said Kim Eoun-ho, president of Hangilsa Publishing who is also the chairman for Bookcity Culture Foundation. “People are not instantly given life insights, and books are necessary for humans to become more humane.”

To provide worn out office workers a place to rest their brain and explore their creativity, the bookstore offers a literary exhibition at the Hangil Book Museum inside the bookstore, music concerts, literary lectures, a cafe with drinks, as well as meeting rooms for any kind of discussion or small conferences needed. The bookstore sees its highest number of visitors during lunchtime on weekdays.

1. Inside Sunhwa Dongcheon bookstore, there are books on display on the walls. 2. Books made by 19th-century literary artist William Morris are shown at Hangil Book Museum. 3. Patterns shown at Hangil Book Museum, located inside Sunhwa Dongcheon. 4. A photo of a bookstore taken by President Kim Eoun-ho of Hangilsa Publishing during his travels on display at Sunhwa Dongcheon. 5. One painting in the series “The Territory” by Kim Uk on display at the bookstore. 6. Images part of the ongoing “Power and Satire” exhibition at the museum. [LEE SUN-MIN, HANGILSA PUBLISHING]

“We need to be a playground for those who are thirsty for artistic ideas or more knowledge,” said Kim who has worked with other publishing companies to make the Forest of Wisdom, a gigantic library filled with over 200,000 books in floor-to-ceiling shelves in Paju Book City, Gyeonggi, in the northwestern outskirts of Seoul where visitors can not only read books but also rest with a cup of coffee or tea in hand. “You would be surprised to see how many people gather when there is a place where they can linger.”

There will be a classical music concert offered for free on June 20 at the bookstore’s museum. A series of lectures by historian Lee Ehwa will be held every Thursday until July 20. He covers major events in history like the establishment of the Joseon Dynasty (1392-1910) and Korea’s Liberation Day - August 15, 1945, when Korea earned its independence from Japanese colonial rule. Each lecture is 20,000 won ($17.69). In July, the bookstore will switch gears to focus on economic ideas and offer lectures that delve into ideas suggested by the economist Adam Smith.

For those interested in “beautiful” books, a design oasis can be found in the Hangil Book Museum, where an exhibition of “Bookart of William Morris” is currently being held. The works of renowned 19th-century literary artist William Morris, who focused on designing covers and pages for books to draw attention to the artistic side of books are on display. Looking for some satirical ideas? Turn to the other side of the museum where an exhibition called “Power and Satire” is ongoing featuring work by cartoonists and illustrators who had brought text-heavy literary works to another level in France in 19th century. These two exhibitions, along with “Bookart of Gustave Dore” cost 6,000 won for those who want to take a look.

The bookstore is set up like a maze - starting at the entrance where there is a display of objects shaped like books but made with porcelain, crystal and more, the aisle turns to the left and right to show off the different sections.

“What we need to have is cultural infrastructure and cultural welfare so that we can learn how to think multi-dimensionally,” said Kim. “Now the different cultural genres, including art and music, all cross with one another, so this new bookstore can be a space where experts and amateurs interested in different fields of cultures can be housed together for further discussion and creative works.”

The location, walking distance from City Hall station, line No. 2, is meaningful, as Sunwha-dong was where the publishing company was located in the 1970s soon after its establishment.

The company had set a goal to celebrate its 40th anniversary last year with a slogan “Again with readers,” as it wanted to remember that readers are those who suggest the direction in the literary market and decide what kinds of books become readily available on the shelves.

Kim argued that what he does with this experimental bookstore can lead to a bigger success, if other publishing companies or public organizations try to follow his lead and make more opportunities for people to “hang out” in bookstores and libraries. Kim even suggests making smaller-sized libraries that can also function as cafes in each neighborhood where people can choose books to their liking.

Although this is just one of the ideas Kim has yet to make come true, he is confident that he will execute his ideas in the coming days and he is a firm believer that the literary world will “last forever.”

“Even if paper books are said to be declining and electronic books are on the rise, these are all still books in different formats,” said Kim. “We just need to provide a new function for paper books or even think about ways to make more bookstores - whether online or offline - with personality.”

Sunhwa Dongcheon is open from 10:30 a.m. to 7 p.m. everyday. The bookstore is free to enter but it costs 6,000 won for adults to enter Hangil Book Museum. The bookstore is located about a five-minute walk from City Hall Station, line No. 1 and 2, exit 10. For more information about the bookstore, go to blog.naver.com/sunhwadongcheon or call (02) 772-9001.