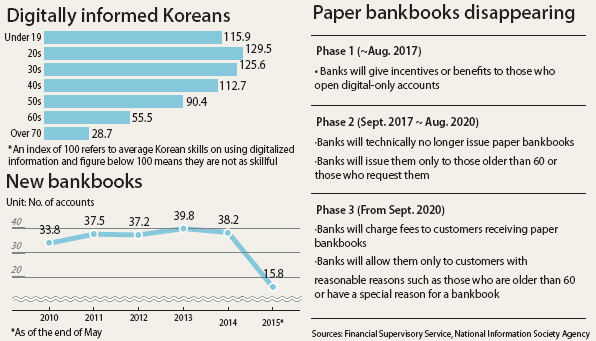 When a reporter told her that banks are closing branches, she shook her head. “Do they want old people like me to just die?” she said. “When the branch nearby my neighborhood closes, I will find another branch even though I would have to take a bus.”

The financial sector is going through many changes due to technological developments. But many who are not used to the digitalization are expressing concern.

The National Information Society Agency’s data shows that the senior population is falling behind with digitalization. If the average Korean’s skill at using digitalized technologies is set at 100, those in their 60s was much lower at 55.5. The figure for those in their 70s was only 28.7, which means they are far behind on technology, compared to other generations. 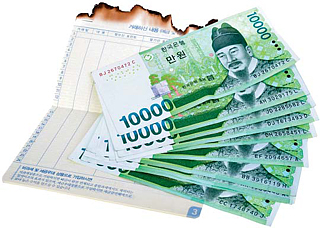 Lee Ju-yeol, governor of the Bank of Korea, also said this month that developments in the finance sector, including smartphone banking services, might create a disadvantaged group of people who aren’t able to enjoy them.

Local financial institutions are trying to digitalize most of their work by attracting customers through offering benefits on service charge fees and interest rates. On the other hand, they are closing offline branches that cost them a lot to operate as well.

Financial authorities also are participating in the digitalization. The Financial Supervisory Service announced its plans to get rid of paper bankbooks two years ago. Starting in September, local banks will no longer issue paper bankbooks unless they have specific reasons. From September 2020, banks will charge fees to customers who request paper bankbooks.

Already, many seniors in Korea, most not familiar with using the internet and smartphones, are disadvantaged by not getting benefits that banks offer to customers who use digital services.

“I do have a smartphone but I don’t find the need to use mobile banking services since the actual bank is very close to my house,” Kim Joo-il, an 81-year-old man, said. “I didn’t know about the possible benefits that I can receive through mobile banking as well.”

Ha Sun-yeon, 76, said she tried to learn to use mobile banking but gave up on it. “My children taught me how to transfer money through using mobile banking but I couldn’t do it as it hurts my eyes,” she said. “I don’t understand why banks charge more fees at the windows [than mobile banking] but I have no other option.”

For this reason, the FSS has allowed banks to issue banknotes only to those older than 60. But they won’t be able to receive incentives like better interest rates than customers who are opening digital-only accounts.

Many seniors interviewed objected to the discontinuation of paper bank books.

“I really have to keep paper documents as a record to feel comfortable,” said Hong Jang-mi, 73. “I think I will be nervous when paper bankbooks disappear in the future.”

Korean seniors understand how convenient it is to use the digital banking services, but they don’t see it as useful.

There are some seniors who are using digital services, though the amount seems to be low.

A 70-year-old woman surnamed Kwak said she exchanges currencies and opens savings accounts through her smartphone. “I used the telephone-based banking service before but started using the mobile device after bank clerks recommended it to me,” said Kwak. “I don’t have to go to the bank or find my paper bankbooks since I can do everything through my smartphone.”

Getting used to the mobile banking service is not all dependent on the age of a customer. Chang Byung-joon, 83, checks his spending through his smartphone. “I think it is more comfortable since I don’t have to visit banks or ATMs to check my card uses,” he said. “I heard the number of banks is decreasing and I will work on learning more services that I can do with my smartphone.”

Some argue that financial institutions should promote more often to seniors and develop or improve technologies to attract more of them.

“We are currently promoting and educating to help senior customers use digital financial services,” said Lim Min-soon, a marketing director at KB Kookmin Bank. “We are also working on offering various kinds of services like biometric authentication.”