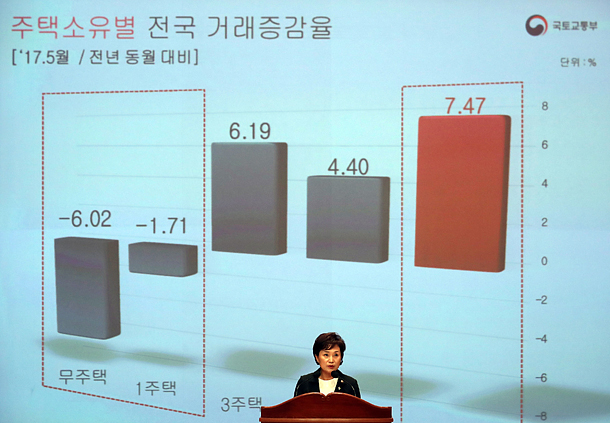 Kim Hyum-mee, the new minister of land, infrastructure and transport, speaks during her inauguration ceremony on Friday at the government complex in Sejong. [YONHAP]

The inauguration ceremonies of government ministers are typically staid affairs, formal gatherings where the new designates speak in broad strokes about their general vision.

So it was unusual on Friday when Kim Hyun-mee, the newly sworn-in land minister, began her first day on the job with a detailed PowerPoint presentation on her policy proposal to tackle real estate speculation.

Kim vowed to rein in investment by owners of multiple buildings who she says have become responsible for driving up prices in the four most affluent districts in the south of Seoul: Gangnam, Seocho, Songpa and Gangdong.

“[The ministry] compared housing sales this May with those of last May in the four districts,” Kim said, “and the number of purchases made by Koreans who own one property actually dropped during that period, while those by people with more than five properties surged 53 percent.”

Of the new homebuyers, she noted that the proportion of those under the age of 29 significantly increased, a dubious factor, she said, given that younger Koreans do not likely have the means to purchase expensive buildings, especially in southern Seoul. “That fact makes the case for potential dubious dealings,” she said.

The new minister reiterated that the main culprit behind the country’s housing bubble is real estate speculation rather than a lack of homes.

Kim, who is the first woman to lead the Ministry of Land, Infrastructure and Transport, also pledged to expand public housing for recent graduates and newlyweds and to introduce ceilings for rental contracts. Other policy priorities include balancing development between cities and rural areas and public transit fare reduction.

The minister’s stern comments against real estate speculation came four days after the ministry and financial authorities added parts of Busan and Gwangmyeong in Gyeonggi to its watch list of regions where buyers will face heavier scrutiny on their ability to pay back mortgages.

The government also extended limits on the transfer of purchase rights for new construction projects to all of Seoul. Currently, homebuyers in three districts in southern Seoul - Gangnam, Seocho and Songpa - and Gangdong in eastern Seoul are banned from reselling their property until they register their ownership. Such a rule will be applied to all Seoul districts as of Monday.

The repercussions of the real estate regulations reverberate in the targeted regions following the announcement. Apartment prices in Seoul rose 0.12 percent as of June 19 compared to 0.18 percent the previous week, according to the Korea Appraisal Board, a government agency.

The four southern Seoul districts in particular showed a steep decline, from 0.31 percent to 0.03 percent.

“The real estate market is in a wait-and-see mode as the government crackdown and new regulations unfold,” said Kang Yeo-jeong, head of the statistics division at the Korea Appraisal Board.

Home prices in Gwangmyeong, Gyeonggi, which was newly added to the watch list, increased by 0.15 percent from the previous week’s 0.19 percent. The price growth in Busan also went down to 0.07 from 0.1 while that of Sejong also fell to 0.33 from 0.78.

Market watchers predict the transactions will continue to slow in the coming months.

“Besides the regulation, there are several important factors to watch such as an anticipated policy for the control of household debts and the possibility of an interest rate increase by the Bank of Korea,” said Ham Young-jin, head of the research center at market tracker Budongsan 114. “They will contribute to lowering transactions in the regions such as Seoul and Busan for the time being.”