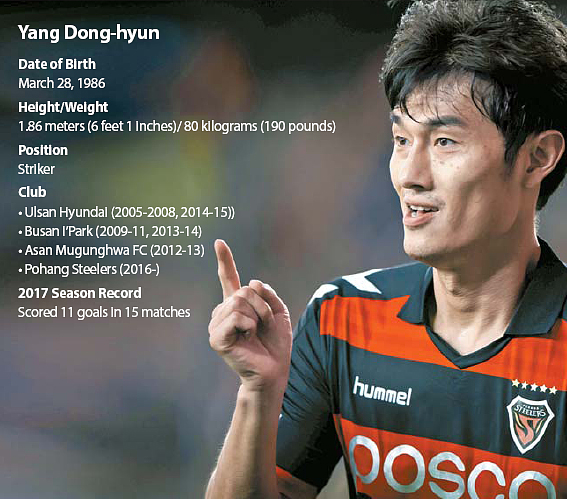 During his junior career, the Pohang Steelers’ Yang Dong-hyun was rated Korea’s next rising football star, but that didn’t last long as he spent his 20s suffering injury after injury. Now in his 30s, however, Yang is back.

During the K-League Classic match against Incheon United on Wednesday, Yang scored two goals to tie the K-league Classic’s scoring with Jair Silva of Jeonnam Dragons with 11 goals in 15 matches.

Yang, who transferred from Ulsan Hyundai, has shown significant improvement after playing under Choi Soon-ho, manager of Pohang Steelers.

“Coach Choi teaches me in detail how I have to move on the field to score more goals,” Yang said. “Since I am a one-top striker, he told me to stay in the center as much as possible. As we play according to formation and strategy, I’m given more opportunities to score.”

Before Yang started playing football, he used to be a runner, and his speed definitely helps him on the football pitch. Yang was given an opportunity to play football abroad in Europe in September 2002, with support from the Korea Football Association. However, he had to end his dream of playing football in Europe due to a stress fracture in his pubic bone.

“At the time, I thought it would get better eventually,” Yang said.

Given no translator or support in Europe, Yang worried about going back after rehabilitation in Korea and, rather than return, he debuted in the K-League Classic with Ulsan Hyundai. But he had more trouble in the K-League starting in 2007, when he fractured his right ankle and tore his ligament in his left ankle in 2008.

Yang’s name was discussed as a possible member of the Korean national football team for the 2008 Beijing Olympics, but due to injury, he missed his chance to represent the country.

“I had a dream of playing in the Olympics as a member of the Korean national football team,” Yang said, “but once I lost my chance, I had trouble falling asleep for a while and just stayed in the hotel room, not wanting to meet anyone.”

After a rough 2008 season, Yang left Ulsan and transferred to Busan I’Park, but again, he wasn’t able to do much throughout the season, only scoring one goal.

His turning point came when he joined Asan Mugunghwa FC, also known as Korean Police FC, in 2012. He trained with some of the K-League’s top players, like Yeom Ki-hun of Suwon Samsung Bluewings and Jung Jo-gook of Gangwon FC, who was the leading scorer in the K-League Classic in the 2015-16 season, and learned to change his mindset.

“It was a valuable time for me,” Yang said.

Since then, he hasn’t had injuries and has slowly shown improvement. Now, some fans have expressed a hope to see him join the Korean national football team for the next two remaining final group qualification matches, against Iran and Uzbekistan, for the 2018 FIFA World Cup.

Yang briefly joined the national team in 2009, but since then, was never selected.

“I’ll be very glad to be on the team,” Yang said. “Every season, my goal is to score a goal every two games, for 18 goals in a season.”