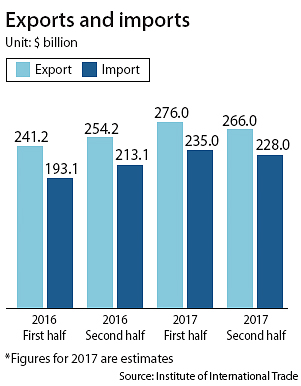 As the global economy continues to show signs of recovery, a local think tank projected that the aggregate of the trade volume for Korea will surpass $1 trillion this year, for the first time since 2014.

Korea exports, “buoyed by the recovery of the global economy and the quality of trade, has posted two-digit growth for five straight months, showing a clear sign of recovery,” the Institute for International Trade (IIT), a think tank under the Korea International Trade Association (KITA), explained in a report released this weekend. “Inbound shipment has also recorded two-digit growth for five consecutive months… as a result, the overall volume of trade is projected to reach $1 trillion again for the first time since 2014.”

The IIT said international trade will drive the global economy forward this year.

According to a report by the World Trade Organization in April, global trade is forecast to expand by 2.4 percent this year.

“Leading indicators of real trade growth are up in the early months of 2017, suggesting a strengthening of trade at the start of this year,” said the WTO in the report. “Container throughput of major ports has recovered from its slump of 2015-16 to reach a record high level… A key index of world export orders has also climbed to its highest level in several years in February, pointing to faster trade growth in the coming months.”

Demand for the Korean semiconductor continues to expand due to the rise in demand for information technology devices such as smartphones. As a result, ship exports, which stood at $62.2 billion in 2016, are estimated to jump more than 30 percent to $81 billion this year.

Korean imports skyrocketed 21.6 percent from January to May this year compared to a year earlier to $193.6 billion, hoisted by improved consumer sentiment.

There are, however, some headwinds expected as Korean exports approach $1 trillion.

One of the key assumptions behind IIT’s project was that the annual average oil price remains above $50 a barrel. “Our exports hovered above $1 trillion from 2011 for four straight years,” said IIT. “However, it fell to around $900 billion from 2015 to 2016 due to the slump in global economy and low oil price.”

As of Friday, the price of West Texas Intermediate, which started above $55 early this year, stood at $43.01. The average price of WTI in the first quarter of 2017 was $53.10. KITA’s think tank projected that the annual average price of oil will be about $50.

Another potential risk that could deal a blow to Korea’s trade are protectionist trade policies by the United States and other major economies as well as fluctuations in exchange rate and interest rate due to the continuous rate hike by the U.S. Federal Reserve.