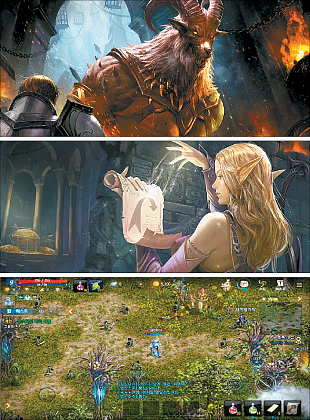 Lineage M, a mobile MMORPG from NCSOFT, launched on Wednesday and has received mixed reviews from the public. The online game developer also came under fire when one of its executives was accused of insider trading. [NCSOFT]

The first week after the launch of Lineage M was a rollercoaster ride for both the game and its developer. While the game received mixed reviews from the public, developer NCSOFT was under fire after an executive was suspected of insider trading.

NCSOFT, the leading online game company in Korea, opened the servers of Lineage M to the public on Wednesday. Lineage M’s release was a much-anticipated event, with more than 5 million people signing up for the game prior to its launch.

Lineage M is the mobile remake of massively multiplayer online role-playing game (MMORPG) Lineage, one of the most successful online games in Korea’s history. The game is still famous, two decades after its launch.

Lineage M got off to a rocky start.

Some 100 servers on the game were opened simultaneously at midnight Wednesday. But when users tried to log in, the server failed to respond and they were unable to access the game. It wasn’t until 3 to 4 a.m. that the server was stabilized. 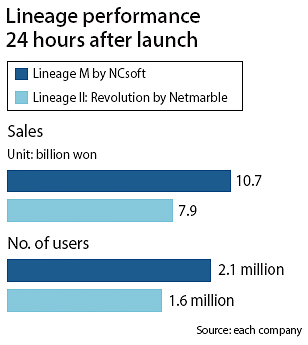 “The server went down because of the large amount of traffic,” said an NCSOFT spokesperson. “A lot of people ended up on a waiting list because the number of players online went over the capacity of the servers. But since the maintenance in the morning of the release, things have been stabilized.”

Just as NCSOFT thought it had settled the server problem, it was up against the wall again when users complained that the game was nearly impossible without spending cash.

“Advanced items are essential to play this game without falling behind the competitors,” said a user. “But it was impossible to get them without paying actual money. It was as if NCSOFT was seeing the users as their cash cows.”

Some analysts, however, thought the negative impact would be short-lived.

“Many negative comments were posted on major game bulletin boards,” said Kim Yoon-jin, an analyst from Daishin Securities. “But hard data such as traffic, revenue, and professional gamer’s opinions are extremely positive.”

“In line with expectations, the initial response has been unfavorable,” said Kim Sung-eun, an analyst from Korea Investment & Securities. “But we believe early concerns are excessive as Lineage M’s popularity should be determined by the migration of Lineage players.”

According to NCSOFT’s data, the company raked in 10.7 billion won during the first 24 hours of service, a new record in Korea’s mobile gaming industry. It surpassed the previous high set by its cousin Lineage II: Revolution. Netmarble-made mobile Lineage scooped up 7.9 billion won in its first day. On Friday, the price of NCSOFT’s stock jumped 11.78 percent to 389,000 won. It was the top grossing app on Google Play Store and Apple App Store by Friday.

The game developer, however, still has issues that could jeopardize its reputation.

Analysts speculate the share price took a dive due to the exclusion of a key feature of Lineage, the trading system. The company confirmed Tuesday that it would launch the game with a rating of “12,” which is equivalent to PG-13. The Lineage trading system is considered one of the main drivers of the game’s popularity.

NCSOFT came under fire when it was revealed that vice president Bae Jae-hyun sold some 8,000 shares of the company in advance of the game’s release. It raised suspicions that Bae offloaded, knowing the stock price would fall due to exclusion of the trading feature. The game maker has denied the allegations.

The vice president “sold the shares to secure capital necessary in exercising his stock option,” said Yoon Jin-won of the communications department. “NCSOFT decided upon a board of directors’ meeting that Bae would acquire 10,000 new shares of the company.”

The Financial Services Commission said it began an investigation into possible insider trading.