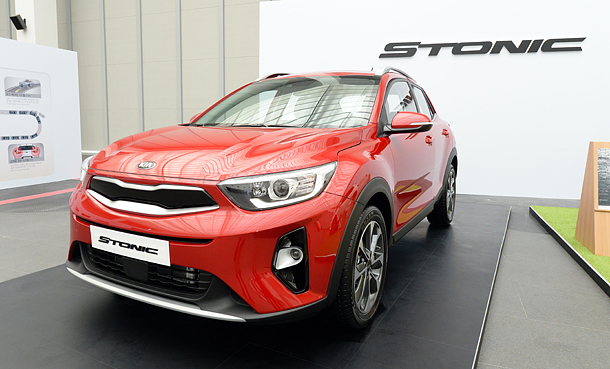 Kia Motors, the second largest automaker in Korea, unveiled its first subcompact crossover, the Stonic, to the public on Tuesday, an addition that completes the company’s sports utility vehicle lineup.

“The market is becoming more segmented worldwide due to rapid changes in people’s lifestyles,” said Park Ki-hong, a manager at Kia’s design center, in a media briefing on Tuesday at the company’s research and development center in Hwaseong, Gyeonggi. “Our target market is single-family households as well as young couples.”

The overall size of the subcompact SUV market continues to grow in Korea, exceeding 100,000 by the end of last year, and the Stonic is the new bullet in the barrel for Kia as it hopes to gain a share of the rising market.

With the release of the new car, the company’s SUV portfolio now covers all segments in the crossover market, from the large Mohave to the mid-sized Sorento and Sportage as well as hybrid Niro to the subcompact Stonic. The Stonic comes with a 1.6-liter diesel engine topped with a seven-speed dual-clutch transmission.

Kia claimed the Stonic is an urban subcompact SUV that fits the needs of consumers in their 20s and 30s. Younger consumers tend to prioritize cost-effectiveness, design and functionality, the company said, which is why they decided to bring down the price to the lowest among compact crossovers running on diesel in Korea. In comparison to Stonic’s starting price, that of SsangYong Tivoli TX, which also comes with a 1.6-liter diesel engine, starts at 20.6 million.

Seo Bo-won, director of domestic marketing at Kia, said consumers may be able to save as much as 3.66 million won with the entry-level trim of the Stonic in comparison to SsangYong’s Tivoli TX. The director explained this includes the amount drivers can expect to save on gas. The Stonic gets about 17 kilometers per liter (40 miles per gallon), whereas the Tivoli gets about 14.7 km/l.

“We prioritized cost-effectiveness in developing the Stonic, which is why we decided to launch the diesel-model first,” said Seo. “We will consider launching gasoline models after seeing the market’s reaction to the current model.”

The Stonic’s design comes through collaboration by Kia’s design center in Europe and the R&D center in Hwagseong, the company explained. “We had three key concepts in mind in designing the car - agility, robustness and uniqueness,” said Park of Kia’s design unit.

With the release of the Stonic, Kia is expected to join forces with its parent company, Hyundai Motor, in the b-segment crossover market. Hyundai released its own small-sized SUV, the Kona, earlier this month. Stonic’s price is about 2 million won less than the Kona, while the Kona boasts a more powerful powertrain, according to Seo.

“Kona is more revolutionary, while Stonic is closer to how a traditional SUV should be,” said the marketing director.

The Stonic’s main playground will be Korea and Western Europe, the director added, where the demand for small-sized crossovers continues to skyrocket. Nearly 10 percent of all cars sold last year in the region were subcompact crossovers.

The company began accepting pre-orders for the new SUV in Korea on Tuesday.