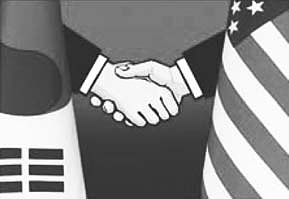 In greeting Japanese Prime Minister Shinzo Abe at the White House for the first time, U.S. President Donald Trump gave the visitor a hearty embrace and held on to his hand for 19 seconds in front of news cameras. In a show of rare warmth to the Japanese leader, Trump had all his closest aides — daughter, son-in-law, vice president, and chief of staff — seated for his first day of talks on Feb. 10 at the Oval Office. We will have to see what kind of reception he offers South Korean President Moon Jae-in. It will be a signal of which of America’s two Asian allies Trump favors more at a time of great sensitivity around the Korean Peninsula.

Trump swept Abe off his feet by mixing business with pleasure during his stay in the U.S., ferrying him on Air Force One to Palm Beach, Florida. Then a chopper carried Abe and his wife to Trump’s beachfront Mar-a-Lago retreat for a weekend of dining and golf. The two strolled around the golf course for five hours. Trump played with a gift from Abe: a $3,800 golden golf club from the Japanese Honma label that he received months earlier as president-elect.

Play was clearly not on Trump’s mind when he met Moon for the first time over dinner two nights ago. So what made Abe stand out among other summit visitors? The reception owed a lot to meticulous planning by the Japanese. Tokyo got help from Charlie Black, chairman of the Prime Policy Group, a widely-known Republican political strategist, and Paul Manafort, campaign manager and chief strategist for Trump’s presidential campaign. Toshihiro Nikai, secretary general of the ruling Liberal Democratic Party, and Yoshihide Suga, chief cabinet secretary, received special cramming from PPG’s top men on Trump for a fee of $50,000. The group will likely be rewarded with much bigger fees from the Abe administration for lobbying on behalf of Tokyo.

Another advantage for the Japanese leader was generous business gifts lobbed at Trump by Japanese enterprises. When Softbank CEO Masayoshi Son met president-elect Trump, he pledged $50 billion worth of investment in the United States capable of generating 50,000 jobs. Toyota promised to invest $10 billion over the next five years. Hiring is the key for Trump as he was elected through the votes of unemployed whites in rural states. Abe and his Japanese posse satiated Trump’s ego and played to his America First agenda. The Korean business delegation traveling with Moon also pledged a combined $35.2 billion in the U.S. over the next five years. Trump must not underestimate the Korean investment: he should recognize that the Japanese economy is triple the size of South Korea’s.

So how prepared was Moon for his first visit to the U.S.? He got advice from Moon Chung-in, his special adviser on security and diplomacy, who made an earlier visit to Washington, and Im Dong-won, a former chief of National Intelligence Service who designed and administered the Sunshine Policy for former President Kim Dae-jung. He also met with former ambassadors to Washington. They would have advised on the agenda: the North Korean nuclear problem, disagreements over the deployment of a missile shield, and a possible revisiting of the free trade agreement. But none of them could have coached Moon on coping with Trump’s unpredictable and difficult character and ways.

The Blue House lost a very good chance of getting a special lecture on Trump in May. PPG’s Charlie Black and Paul Manafort were to accompany Sen. John McCain, who is the chairman of the U.S. Senate Armed Services Committee, on a visit to Seoul. The two are like shadows of McCain. When the Blue House could not arrange a meeting with them with Moon, the group instead headed to Vietnam. McCain has as big a say in defense strategy on the Korean Peninsula as the U.S. Secretary of Defense and White House security adviser. The Blue House made a major mistake in turning them away. The national security adviser at the Blue House received a two-page introductory note from PPG before they were heading out for their Asian trip. It said that the group’s leaders were very close to Trump and that they could advise on the thinking of senior American officials on bilateral issues. In America, politicians, government officials, and lobbyists are considered as one. Diplomats despise lobbyists, but nevertheless cannot do without them.

There is no need to place too much hope on the first round of summit talks. Moon should assure U.S. leaders that his government will complete an environmental assessment as fast as possible to proceed with the full deployment of the Terminal High Altitude Area Defense system. He should reiterate that the two states should work on freezing North Korean nuclear program and then eventually attempt complete denuclearization. He should persuade them that tough sanctions should be imposed while leaving the option open for inter-Korean dialogue when certain conditions are met. Washington is viscerally biased against liberal administrations for being anti-American. His fluently English-speaking special adviser was sent to clear some misconceptions, but ended up aggravating them. Moon will come home with success from his first overseas trip if he can assure Trump how grateful Koreans are for the U.S. alliance and get a comment from Trump similar to what he said after meeting Abe: “We have a very very good bond, very very good chemistry.” Love at first sight isn’t required, but chemistry matters.