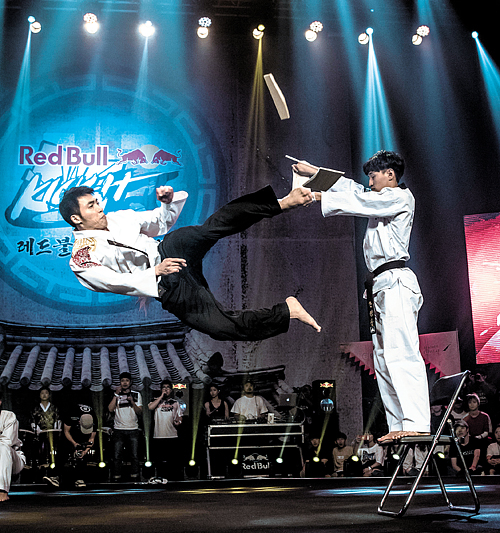 Many open taekwondo dojang, or studios, for kids. But for Shin Min-cheol, a 30-year-old player who has now reached retirement age, this was a problem. Shin, who founded “extreme taekwondo” 10 years ago, still challenges himself every day to kick higher and faster.

“I’ve always felt that taekwondo in Korea is perceived by the general public as a mere sport for kids,” says Shin. “Parents send their kids to taekwondo studios to help them build strength and play with other kids. I’m not saying that it’s wrong [to become an instructor of taekwondo schools] but I felt that at least these young athletes should not think about giving up what they love to do because of concern for an uncertain future.”

That is why Shin established Mirme Korea, an extreme taekwondo group and training center, in 2012. Since then, Shin has worked to spread the sport and create a place for young taekwondo players in the future. “That is why I’ve been participating in the Red Bull Kick It event for five years now,” says Shin, who is sponsored by Red Bull. The Austrian energy drink company has been organizing this annual kicking competition since 2013, “bringing together disciplines as diverse as capoeira, karate, kung fu, taekwondo, gymnastics and breakdancing,” says the company. When the top 16 martial artists are selected, they compete in a final match every summer in Seoul.

At this year’s final match, held on June 3, Shin had to give way to Jacob Pinto, who won the championship in 2015. Shin was the champion last year.

“By participating in the event, I believe I took part in introducing taekwondo to the general public,” says Shin. “The event is immensely popular worldwide among non-athletes as it is really entertaining compared to the usual taekwondo competition.”

To hear more about extreme taekwondo, the Korea JoongAng Daily sat down with Shin for an interview. What follows are edited excerpts from the interview.

Q. Tell us more about extreme taekwondo. Why did you come up with this new style?

A. I always felt uncomfortable about how taekwondo is being perceived more and more as a mere sport for children. I wanted to change how the general public perceives taekwondo and let them know that it is a Korean martial art that boasts the best kicking techniques. But I noticed that taekwondo itself couldn’t really attract that much attention. So I decided to incorporate other extreme martial arts into taekwondo so that it would be more appealing.

Why did you establish Mirme?

One day, I looked around and saw so many of my colleagues, seniors and even juniors giving up taekwondo, as it is hard to make a living out of it. If these talented players all fall out, I feared taekwondo in Korea would no longer develop.

We now have 26 members who I call extreme taekwondo players and about 23 trainees at Mirme. We are still paving the way for our juniors and it is beginning to see light. Just by looking at myself as an example, after getting sponsored by Red Bull, other taekwondo players began to realize that there’s another option in their future, other than giving up their dreams or opening up a kids’ taekwondo studio. At Mirme, we train young players to find a second field of expertise, like an extreme taekwondo player who specializes in teaching, or making promotional videos or creating performance repertoires. I also try to perform more as Mirme in various events both at home and abroad, like the performance we created about the independence movement. The video clip of our performance during National Independence Day on Aug. 15, 2015, is the most popular.

Don’t you get criticized by taekwondo masters for incorporating other martial arts into taekwondo?

I did, of course. But whenever I had a chance to talk to them, I tried to explain that it’s not so different from authentic taekwondo and that it is not merely entertainment. Many older masters think what we are doing is just acrobatics intended to make people’s jaws drop. But that’s not true. It sill emphasizes the importance of do [or tao], but we also try to kick higher, stronger and faster by accumulating skills from diverse martial arts and increasing our flexibility. When I tell them this, they slowly accept it. I think they are showing this by creating an extreme taekwondo category at the Korea Taekwondo Association and designating me as a trainer for it. That is such a great achievement.