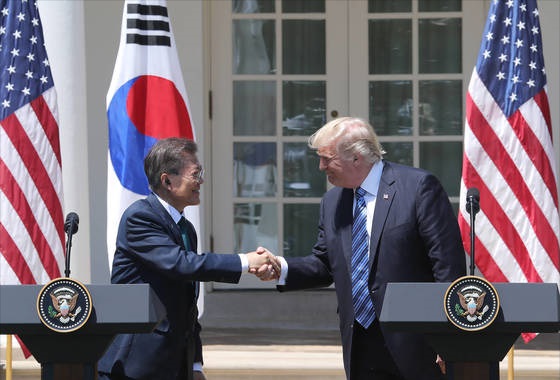 WASHINGTON — President Moon Jae-in faced a demand on Friday by U.S. President Donald Trump to resolve trade imbalance between the two countries and pay more of the cost for the presence of U.S. troops in Korea, while winning assurances for stronger defense measures to deter North Korea’s rapidly advancing threats.

In the joint press conference that followed the Oval Office summit, Trump said the era of strategic patience with the North Korean regime has failed. “And frankly, that patience is over,” he added. After calling upon regional powers and all responsible nations to implement sanctions and pressure North Korea to end its nuclear and missile programs, Trump said now the goal is “peace, stability and prosperity for the region.”

The United States will defend itself and its allies, Trump said, and as part of that commitment, he said he wants to ensure that the cost of U.S. military presence in South Korea is equitably shared. “Burden sharing is a very important factor,” he said. “A factor that is becoming more and more prevalent, certainly in this administration.”

Trump also spoke of a “fair and reciprocal economic relationship” with South Korea, while complaining that the Korea-U.S. free trade agreement has increased the U.S. trade deficit with South Korea by more than $11 billion.

Trump expressed satisfaction with the fact that South Korean companies are making new investments in the United States in time with Moon’s trip, such as Cheniere’s export of American liquefied natural gas to South Korea in a deal worth more than $25 billion.

The U.S. president said he and Moon discussed “tough” trade issues, particularly auto and steel, and that Moon promised to create a level playing field. He said Korean companies are selling cars in the U.S. market and that U.S. automakers should have the same opportunity to compete in the Korean market.

“I've called on South Korea to stop enabling the export of dumped steel,” Trump said, adding that the two countries will work on the issues and sign a deal that is “great” for both of them.

Following Trump’s remarks, Moon gave his own summary of the summit. While he made almost no specific mention of the trade issue or demand that Korea share more of the cost of U.S. troops in Korea, Moon said he recognizes Trump’s “strong commitment towards the development of the ROK-US alliance, the resolution of the North Korean nuclear issue and the establishment of a permanent peace on the Korean Peninsula.”

He added, “President Trump and I agreed that only strong security can make true peace possible,” and that “Through the [South Korea-U.S.] joint defense posture, including extended deterrence, we agreed to strengthen our overwhelming deterrence.”

Moon also commented specifically on the issue of denuclearization. “President Trump and I agreed today that the resolution of the North Korea nuclear issue is our top foreign policy priority and that we will closely coordinate our policies,” he said. “In this vein, we agreed to work together toward a fundamental resolution of the North Korea nuclear issue based on a phased and comprehensive approach, utilizing both sanctions and dialogue.”

He also warned North Korea to not “underestimate the firm resolution of our two countries” and urged it to return to the negotiation table to discuss denuclearization.

Moon also said Korea will strengthen its joint defense capability with the United States as well as the country’s own defensive capabilities. “In this process," he said, "I hope to see more active technology cooperation in the field of defense industry."

He also noted that bilateral economic cooperation is an “important pillar in pursuing a future-oriented development of our alliance,” without elaborating on the issue of trade. “We agreed to work together to make our economic relations mutually beneficial for the people of both our countries through economic growth and job creation.”

The two leaders were supposed to announce a joint statement at the media session, but it was not released during the event.

Earlier in the morning, Moon and Trump sat down for their first summit at the White House. They started the talks with a one-on-one meeting and then an expanded session with top government officials from both countries.

"We accomplished a lot having to do with our thoughts on North Korea and very much our thoughts on trade,” Trump was quoted as saying in a White House pool report. “We are renegotiating a trade deal right now with South Korea, and hopefully it will be an equitable deal. It will be a fair deal for both parties. It's been a rough deal for the U.S., but I think that it will be much different and will be good for both parties."

"Last night, at the dinner with President Trump,” Moon said, “we discussed various issues through a diverse scope and very honest discussions and on issues to include the North Korean nuclear issue and other issues of mutual interest.”

Moon continued, ”It was a great opportunity for us to further the trust and friendship between me and President Trump. It was also an opportunity to reconfirm that the United States and Korea are walking together on the same path towards a great alliance. Through this summit today, I hope that our relationship can further develop into a more meaningful and fruitful relationship.”

Since he took office earlier this year, Trump has repeatedly promised to renegotiate the Korea-U.S. free trade agreement, which was concluded in 2007 and took effect in March 2012, following a renegotiation. Trump has called the free trade pact a “horrible deal” and vowed to either renegotiate or scrap it entirely.

Moon, however, has insisted that the deal, a legacy of his political mentor, the late President Roh Moo-hyun, is mutually beneficial for the two countries.

At the media conference, Moon also said he invited Trump to visit Korea this year and that Trump accepted the offer.

“I will make all the preparation necessary to make sure that the visit will be yet another milestone in the cooperative relationship of our two countries,” he said.

Ahead of the summit, Moon began his day by visiting the Korean War Veterans Memorial, where he paid respect to the American veterans who sacrificed their lives to defend Korea. One inscription in the Pool of Remembrance at the memorial reads, “Our nation honors her sons and daughters who answered the call to defend a country they never knew and people they never met.”

Moon laid a wreath before the memorial’s 19 stainless steel statues together with U.S. Vice President Mike Pence, whose father was a decorated soldier in the Korean War. Two congressmen, Pete Sessions and Peter Roskam, also attended the event. Their fathers are also Korean War veterans.

The United States was a key member of the United Nations allied forces that fought in the Korean War to defend South Korea. Some 480,000 American soldiers fought in the war and 30,000 were killed while 100,000 others were wounded and about 3,700 remain missing.

Moon’s parents came to South Korea as refugees aboard a U.S. warship during the Korean War. Two years after they arrived in 1951, Moon was born on the island of Geoje in January 1953.