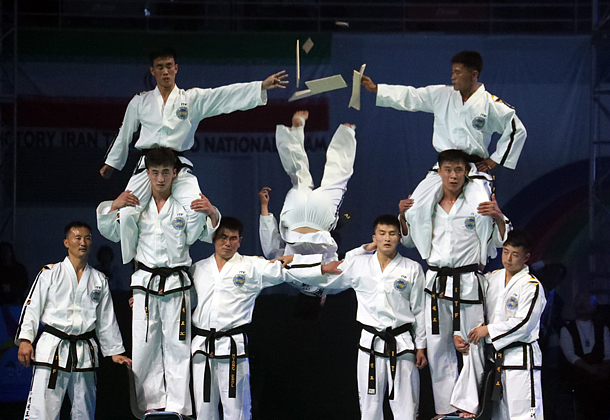 The International Taekwondo Federation’s demonstration team performs at the World Taekwondo Championship in Muju, North Jeolla during the closing ceremony of the event on Friday. [YONHAP]

Korea captured five gold medals to lead all participants, and its 10 medals overall also topped the standings. Korea had one silver and four bronze medals to go along with its five titles.

At the previous world championships in Chelyabinsk, Russia, two years ago, Korea had four gold and one bronze.

Korea won three titles in the men’s competition to lead all nations. On the women’s side, Korea was tied with Turkey and Serbia with two gold medals, but led everyone in total medals thanks to one silver and three bronze medals.

It marked the first time since 2013 that Korea was both the men’s and women’s overall winner.

Korea also topped team points rankings for both men and women. Based on the WTF’s points scale based on medals and number of athletes represented, Korea earned 67 points in the men’s competition and 63 points on the women’s side.

This was the largest world championships ever in the competition’s 44-year history, with 971 athletes and 796 officials from 183 nations participating.

Korea grabbed two gold medals on Day 2 of the competition last Sunday, when the first finals were held. Kim Tae-hun won his third world title in the men’s under-54kg, while little-known Sim Jae-young was the surprise champion in the women’s under-46kg.

On Tuesday, Lee Dae-hoon won the men’s under-68kg gold for his third world title, while Kim Jan-di added a bronze in the women’s under-67kg.

Korea saw another surprise champion on Wednesday, as Jeong Yun-jo, ranked 105th in the world, captured gold in the men’s under-58kg.

On the same day, An Sae-bom got a bronze in the women’s over-73kg.

Oh Hye-ri failed to defend her crown in the women’s under-73kg Thursday, losing in the final to Milica Mandic of Serbia. Also on Thursday, In Kyo-don earned a bronze in the men’s under-87kg.

Overall, Korea was represented in all 16 divisions - eight each for men and women - and won a medal in 10 of them.

The likes of Kim Tae-hun and Lee Dae-hoon reaffirmed their supremacy in their divisions, while 2016 Olympic champions Oh Hye-ri and Kim So-hui - who lost in the quarterfinals in the women’s under-49kg - failed to duplicate their success from Rio de Janeiro.

Sim Jae-young and Jeong Yun-jo were two unlikely champions, and still in their early 20s, they represent a bright future for a country already dominant in the sport.

This was the first world championships in which new scoring rules, approved last November, were put into effect. Kicks to the body were now worth two points, up from one, and referees called tighter matches to help make taekwondo more exciting and spectator-friendly. Scoring generally increased from earlier competitions, though some athletes said referees need to be more consistent

The competition made history on another level. The North Korea-led International Taekwondo Federation (ITF) sent a demonstration team of 16 to perform at both the opening and closing ceremonies. It was the first-ever ITF demonstration at a WT event held in Korea.

The WT, headquartered in Seoul with Korean Choue Chung-won at the helm, is the official international governing body of taekwondo. The ITF, led by North Korean Ri Yong-son, is based in Vienna.

The two organizations have different sets of competition rules, but they have taken steps in recent years to cooperate with one another.

The ITF sent its delegation here as per its agreement with the WT signed in August 2014, called “Protocol of Accord.” The WT will send its own demonstration team to Pyongyang in a reciprocal visit in September, when the ITF hosts its own world championships.