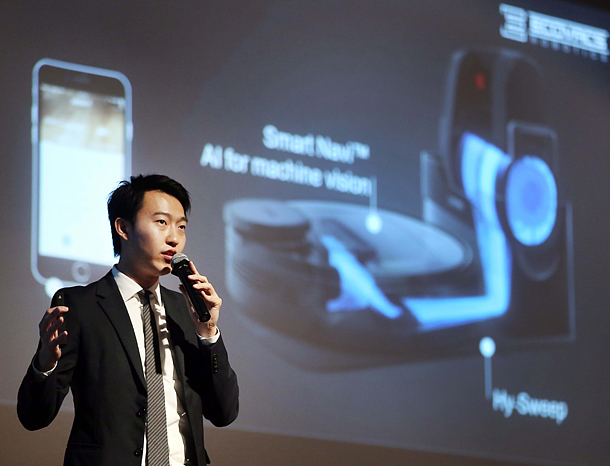 The world’s No. 2 maker of robot vacuum cleaners, Ecovacs Robotics, announced its entrance into the Korean market with the goal of becoming one of the top three vendors in the local market within three years.

The Chinese company started making robot vacuum cleaners for the home in 2006 and is the No.1 brand in China with a 65 percent market share. Ecovacs currently sells in 31 countries worldwide. In late April, three of its products started selling online in Korea to test the market response.

It took two years for the company to thoroughly study the Korean market, said David Qian, president of Ecovacs’ international business unit, in an interview held before a press conference on Thursday. “I think it’s time,” Qian said. “We’re very confident that we have the right product line and that we have found the right [local] partners to work with.”

One of the products unveiled at the press conference offers a function that was added as a result of the market studies in Korea. The company found that Koreans frequently mop their floors after vacuuming. As a result, Ecovacs’ Deebot M86 is equipped with a water tank and a technology dubbed “Ozmo” that can evenly wet a piece of fabric attached to the robot’s underside to wipe floors.

Some of Ecovacs’ products use artificial intelligence technology. The Deebot R98 is able to create a map of the house by scanning the layout. Once the map is complete, a user can designate which part of the map is the bedroom or living room and give instructions like, “Clean the living room at 9 p.m.” via a smartphone app.

“As we venture more into the global market, we’re working with some of the best players,” said Qian. “[For example,] all of the products we’re launching in Europe and the U.S. will be Alexa-enabled next year.” Alexa is an voice-command personal assistant developed by Amazon.

Ecovacs has a wide line-up of models in different price segments. The seven products Ecovacs is officially selling in Korea vary from under 200,000 won to 500,000 won.

“It’s known that the Korean market, in terms of electronics and home appliances, is very competitive because of successful [local] brands like LG and Samsung,” said Qian. “There are other successes too like Yujin, so we do see there’s opportunity for a bigger market.”

The market should grow, Qian said, because of increased awareness and interest in new technologies such as artificial intelligence and the Internet of Things.

“The younger generation is more aware of technology and is more likely to use robotic devices,” he said. “We’ve targeted this group well in China and I see that trend in Korea as well.”

The company is preparing to release an air purifier in Korea next year that can move itself around a house. Later on, Ecovacs plans to release a Unibot, an integrated “home management device” that combines vaccum, humidifier and air purifier. It also works as a security system.