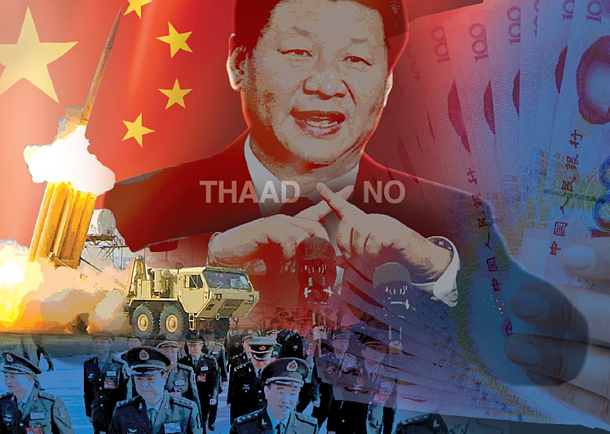 Despite a rumored lessening of pressure on Seoul by China, the Beijing government’s official position is opposition to the deployment of the Terminal High Altitude Area Defense (Thaad) missile shield in South Korea. [KIM YEONG-MOON]

The local media focused on the positive side of President Moon Jae-in’s first summit with U.S. President Donald Trump. They highlighted that Trump recognized Seoul’s leading role in inter-Korean affairs. U.S. media interpreted the summit in a different light. They concluded that Trump reaffirmed to his South Korean visitor that his patience with North Korea was finished.

The New York Times observed that Trump took an aggressive stance towards his Asian friends. It is hard to tell which side is right because both Korean and American media based their observations and interpretations on the press conference and joint statement after the summit.

It is curious how the media of the two countries perceived the statement and mood so differently. It is as if they were at different press conferences. It is questionable if the two leaders really hit it off and built the friendship they claimed to.

Washington’s harsh tone on trade deficits and the need to renegotiate a bilateral free trade agreement also raised confusion. Moon told Korean reporters later that what the two leaders agreed to should be gleaned from the joint statement. But given the style of Trump, who tends to overlook formalities and procedures, Seoul should immediately get ready for a renegotiation of the free trade pact.

Moon seemed to have definitely scored on the thorny issue of the deployment of the Terminal High Altitude Area Defense (Thaad) system, which could have jeopardized the first meeting with Trump. Chinese Foreign Minister Wang Yi bluntly warned Seoul to have “a sense of reality” before Moon headed for Washington. The ruling party head raised the specter of a war if Seoul proceeds with the full installation. U.S. congressmen warned that U.S. troops would be withdrawn if Seoul reverses the decision to deploy the missile shield.

Moon assured U.S. officials that the new administration would see through the installation. Upon meeting congressional leaders, he vowed that an environmental assessment that has suspended the full deployment won’t take long. He emphasized that the delay was procedural because Seoul as a democratic state values a legitimate course for every major policy. His explanation seems to have sat well with the Americans. Trump did not bring the issue up during summit talks. At a meeting with experts on Korean affairs, Moon went further to warn Beijing that it must stop meddling in the sovereign decisions of Seoul.

Seoul has finally put its foot down after months of treading on thin ice between Washington and Beijing over security issues. But Moon will have to deal with his Chinese counterpart, Xi Jinping, to be truly finished with the Thaad controversy. Moon may have a one-on-one meeting with Xi when he goes to a Group of 20 summit in Germany this coming weekend. He will have to persuade Beijing of the inevitability of the Thaad presence in South Korea.

Beijing is expected to resort to even harsher retaliations if Xi does not go home convinced of Moon’s argument. Moon first of all has to earn the backing of the political, business and civic community in South Korea. He must build up a strong consensus at home to make a strong defense abroad. If he has the strong will and support of his own people, the country can withstand any attack from China.