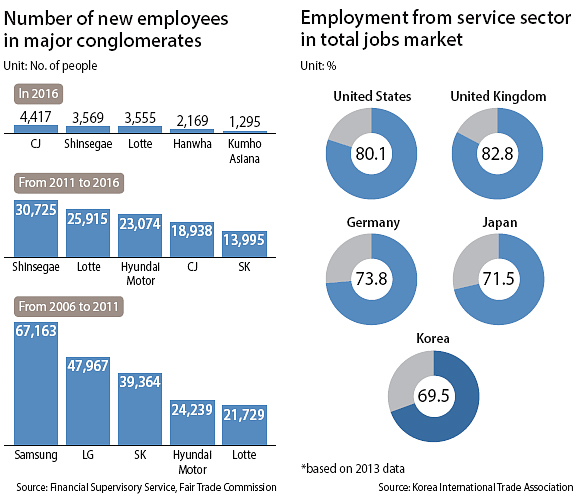 More jobs are now being created in the retail and services sector than in the past, when giant manufacturing companies hired the most.

Of the more than 450 workers at a Lotte Mart branch in Seoul that opened in April, 126 people were hired directly by Lotte Mart, 35 were hired through separate service companies and 300 work for brands that entered the store.

The figures show how many jobs can be created by establishing a single hypermarket.

Employment in the domestic market, traditionally led by manufacturing sectors, is now being led by conglomerates in the retail and service sector, according to data from Financial Supervisory Service and Fair Trade Commission.

But during the latter five years of the decade, from 2011 through 2016, the job market has completely shifted.

The retail conglomerate Shinsegae added the most during the past five years by hiring more than 30,000 people. The ranking was followed by another major retailer, Lotte, which expanded its workforce by roughly 26,000 during that time.

A major reason could have been that it sold its chemical subsidiaries to Hanwha and Lotte in 2015.

Considering the figures shown, industry insiders suggest that the Moon Jae-in administration should look to the nation’s retail and service sector to find answers to creating more jobs.

“The Moon administration vowed to create 810,000 new jobs in the public sector, but this is a short-term approach that fails to tackle the root of the problem,” said Lim Hyo-chang, a business professor at Seoul Women’s University. “Ultimately, more jobs should be created by fostering our service industries, and that also is a global trend.”

According to analysis by the Bank of Korea, the employment inducement coefficient for the service sector is 16.7 people, and for the manufacturing sector, it’s 8.8 people.

The coefficient, according to the bank, refers to the total number of people employed directly and indirectly to produce a billion won worth of a specific product or service. Twice as many jobs can be created in the service sector compared to manufacturing.

Still, the number of jobs offered from Korea’s service industries is small compared to other developed countries. According to figures from the OECD (Organization for Economic Co-operation and Development), earnings in the service industry account for 70 percent of countries’ gross domestic product on average.

But in Korea, the service sector accounts for less than 60 percent of its GDP.

This is why industry insiders also point out that more jobs should be offered by higher-value adding service industries.

“The country needs to find out ways to expand the number of jobs in high-value adding service industries like finance, medical and energy,” said Lee Byung-tae, a business professor at Korea Advanced Institute of Science and Technology.