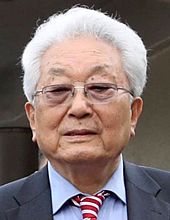 The idea of forming an inter-Korean team for the 2018 PyeongChang Winter Olympics is gaining traction, with President Moon Jae-in discussing the matter with International Olympic Committee (IOC) President Thomas Bach on Monday.

Moon proposed to Bach a plan, taking into consideration the gap in competitiveness between North and South Korea, to enable a joint female ice hockey team for the Winter Olympic Games to be held in Pyeongchang, Gangwon, from Feb. 9 to 25.

In addition to guaranteeing spots for all 23 players of the South Korean female ice hockey entry team, five to 10 North Korean athletes would also be able to participate under Moon’s proposal for a joint team.

“There was consensus that North Korean athletes should qualify for the PyeongChang Olympics through their own efforts,” an official who took part in this meeting told the JoongAng Ilbo Monday.

“But separately, it was agreed upon to continue to take steps to prepare forming a joint inter-Korean women’s ice hockey team.”

North Korea, which is weak in winter sports, has yet to qualify in any category for the Olympics, just over half a year away.

Currently, the North Korea pair skaters Ryom Tae-ok and Kim Ju-sik, who were bronze medalists at the 2017 Asian Winter Games, appear to be the country’s best bet at qualifying for the PyeongChang Olympics, depending on how they perform at a figure skating competition in Germany in September.

And the only category in which an inter-Korean team is possible is women’s ice hockey, which South Korea received an automatic berth for as the host country.

“We’re supporting athletes from the country to be able to qualify for the games,” Bach said last Thursday in Muju as he attended the World Taekwondo Championships. “All the rest, I’ll discuss with President Moon.”

“We plan to propose to the North to keep all 23 South Korean athletes,” a sports official said, “while adding five or 10 North Korean players to the entry team for a unified inter-Korean women’s ice hockey team.”

The government is also considering a plan to designate North Korea’s Masikryong Ski Resort, which opened in 2014, to be used as an official training site for athletes of both Koreas, as well as international skiers.

It is also working on proposing a joint demonstration of the North Korea-led International Taekwondo Federation and South Korea-based World Taekwondo during the Olympics, as well as inviting North Korean performers.

Sports Minister Do proposed a joint women’s ice hockey team on June 20 but said that it was “unfair to drop South Korean athletes who sweated blood and tears to qualify for the Olympics for political considerations.”

While South Korea has proposed to include five to 10 North Korean athletes in addition to its 23 players, if North Korea demands the same number of entry athletes, this would make a team of 46.

This could bring about backlash from other competing countries who may question the fairness of such a team.

There are eight countries competing in the upcoming Olympics women’ ice hockey tournament: the United States, Canada, Finland and Russia in Group A, and Sweden, Switzerland, Japan and South Korea in Group B.

Under the International Ice Hockey Federation’s women’s world ranking, South Korea comes in at 22, well below the other Olympics competitors who rank in the top 10. North Korea is ranked 25th.

The public is also opposed to the idea, according to a survey conducted by the JoongAng Ilbo on its website. Of 1,649 respondents, 95 percent said they were opposed to forming a unified team with the North. Then there is the matter of whether North Korea would even agree to the proposal.

Last month at the opening ceremony of the World Taekwondo Championships in Muju County, North Jeolla, Moon proposed a united team for the upcoming PyeongChang Winter Olympics and for the two Koreas to enter together at the games’ opening ceremony.

A demonstration team of the North Korea-led International Taekwondo Federation (ITF) took part in the championship in South Korea.

Engagement through sports is reminiscent of the North and South Korean women’s victory in the table tennis world championships in 1991, or when the two Koreas marched together to open the 2000 Sydney Summer Olympics and the 2004 Athens Olympics.

But Moon’s gesture has been rebuffed so far by North Korea, which shows no signs of halting its nuclear and missile provocations.

Chang Ung, the only North Korean official on the IOC who accompanied the ITF demonstration team to the South, pointed out in an interview with VOA released on Tuesday that it was “naive” to try to improve inter-Korean relations through sports diplomacy.

“Because our taekwondo team came this time around, they seem to think a bouquet of roses has fallen, but that is not the case,” said Chang, who previously headed the ITF.

Chang added, “That way of thinking could be called naive, if you put it nicely, and hopeless, if you put it bluntly.” He said, “Unless politics is prioritized in the North-South relations, hoping to resolve things through sports is highly naive and expectations are too excessive.”