An uphill battle for Shin Tae-yong

An uphill battle for Shin Tae-yong

For Shin Tae-yong, taking the helm of Korea’s national men’s football team might seem like the ultimate career opportunity, but the 46-year-old coach faces more headache than hope as a last-minute fill-in for Uli Stielike, who resigned over the team’s dismal performance in the 2018 FIFA World Cup qualifiers.

Korea is currently at risk of sitting out next year’s World Cup, which they have been participating in since the 1986 World Cup in Mexico. Shin, who is taking over the team in the middle of the season after the resignation of Uli Stielike, bears tremendous responsibilities. In the two upcoming matches, Korea has to finish with at least one win and one tie to advance to the World Cup. If not, Korea will have to go through a round of playoffs among third-ranked teams in other groups.

The obstacle is time, more specifically lack thereof. It’s the inevitable fate of a head coach being substituted at the 11th hour. The 24-man squad for the remaining qualification matches will be announced on Aug. 21 and the first call-up will be on the 28th. Shin has just under two months to prepare for what will undoubtedly be a challenging match against Iran, scheduled for the 31st.

With such a short amount of time, Shin has his work cut out for him. First, he has to form his coaching staff.

Jung Hae-sung, who was assistant coach of the team under Stielike, decided to resign on Wednesday. “Since Shin has to create his own team, I thought my remaining there could be a concern,” he said.

But the other two coaches, Seol Ki-hyeon and Cha Sang-kwnag, haven’t mentioned anything about resignations yet, which means they will likely remain part of the coaching staff. Analysts believe Shin will try to create the same coaching team as the one in the 2016 Rio Olympics and this year’s FIFA U-20 World Cup.

Another task for Shin is building his team. When it came to player selection, Stielike received a lot of flak for failing to meet his own requirements for players when he was first appointed head coach. Shin is well aware of this, and he will likely put most of his effort into player selection.

But given the limited amount of time, it’s hard to expect big changes to the roster. Some analysts expect Shin to make minor changes and strengthen the team’s strategy, rather than creating a whole new squad, because of his experience in the Korean league and familiarity with Korean players. 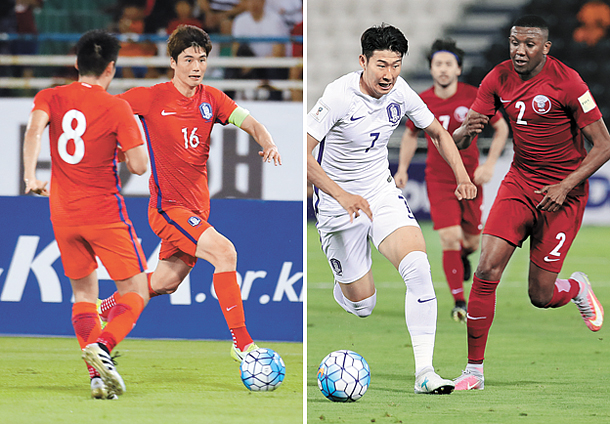 Ki Sung-yueng, left, a center midfielder for Swansea City, takes the ball during a tune-up match against Iraq on June 8 in the United Arab Emirates. Son Heung-min, right, a forward for Tottenham Hotspur, in white, dribbles during the World Cup qualifier against Qatar on June 14 in Qatar. [YONHAP]

Whatever the case, he’ll have to do without two of his strongest players, Ki Sung-yueng of Swansea City and Son Heung-min of Tottenham Hotspur, who are out due to injuries.

Ki injured his knee during Korea’s match against Qatar on June 13, a game that resulted in a dismal 2-1 loss to the lowest-ranked team in the group. Ki had to undergo surgery on Monday, and according to Swansea, Ki is now getting rehabilitation treatment and is expected to miss the beginning of the English Premier League season. Swansea is starting its season on Aug. 12 with a match against Southampton FC.

Ki won’t be able to play until at least mid-August.

As center midfielder and captain, Ki has been the anchor of the Korean team. Whenever Korea’s offense faltered, he had the ability to get in and score. Shin will surely feel Ki’s absence.

Son, a forward for Hotspur, isn’t looking good, either. During the same fateful match against Qatar, Son broke his arm and had to undergo surgery. He’ll need about another month to fully recover, meaning Son, Korea’s top striker, will not be able to play until mid-August, either.

To make matters worse, another power player, Koo Ja-cheol of FC Augsburg, hasn’t fully recovered from an ankle injury he sustained in April.

As of now, the likely replacements will be players from the Korean league. Luckily for Shin, there are a number of K-League players that have as much talent as those playing in Europe. Out of them, Yang Dong-hyun of the Pohang Steelers stands out the most.

Yang has scored a total of 12 goals and is currently the K-League Classic’s leading scorer along with Jair Silva of the Jeonnam Dragons. Yang is the only Korean player to be ranked in the top five on scoring and has shown ability to notch goals in any position, thanks to his height.

Many Korean fans have been waiting to see Yang on the national team roster, believing he could rival Son as a scorer, but Stielike avoided him, citing lack of time on the pitch.

Aside from Yang, Yeom Ki-hun of the Suwon Samsung Bluewings and Kwon Soon-hyun of Jeju United have been mentioned among football fans as possible candidates to replace Ki and Son.

Shin will elaborate on his plans for the team during a media conference today at the Korea Football Association’s headquarters in Seoul.