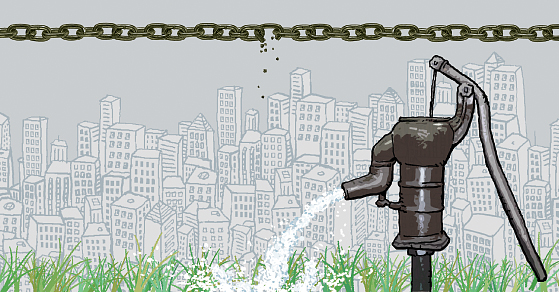 The proposal by the government of President Moon Jae-in to pass a supplementary budget to create jobs in the public sector is frozen due to the legislature’s preoccupation with confirmations of cabinet nominees. The public wants to see bipartisan efforts to make the new government’s ambitious job agenda come true. Still, the supplementary budget needs to be thoroughly examined. The administration claims its policy to increase public sector jobs is intended to “prime the pump” and expects a trickle-down effect in the private sector, bringing new jobs for many young people.

Pump priming is when water or some other liquid is used to draw up more liquid from a well. To get a dysfunctional water pump working, it needs to be primed, or have water flushed back into it to create enough pressure to begin pumping again. If the base is dried up, priming is not possible. Any form of cranking or pressure won’t work. Pouring water from the outside could be useless.

The Korean economy has been sinking into structural stagnation. It built up a lot of steam after the Asian financial crisis of the late 1990s and even after the global meltdown of 2008. But it has been receding over the last few years. The overall economic habitat has been drying up. The cycle of birth, growth, aging, and rebirth has stopped working as it should in a free market economy.

As a result, the corporate community has become overpopulated with ailing, zombie-like entities that should be allowed to die. The aging of the Korean population has not only affected individuals and household, but weighed on the relationship between households and companies. As a result, households have become highly indebted. Job insecurity has risen to worrying levels. Massive fiscal spending won’t solve the problem and might only extend the lives of corporations that should be allowed to go under. Employment is closely interlinked with the demographic of the population, households and companies. Fiscal stimulation will have limited effects.

Japan is a prime example of the futility of pump priming. Since its asset bubble burst in the late 1980s, the government spent nearly 100 trillion yen ($884 billion) over the last 20 years and mobilized all possible means available to stimulate the economy: below zero interest rates, a weaker yen, tax incentives, and fiscal expansion. Nothing worked because of the structural weaknesses of the Japanese economy and internal socio-economic problems.

President Kim Young-sam, who embarked on radical reforms upon taking office in February 1993, once enjoyed an approval rating of nearly 90 percent. He retired with a rating as low as 7 percent after his poor economic policy contributed to a liquidity crisis. Massive fiscal spending to stimulate corporate activity and rural development in his first 100 days backfired. Few could have imagined the well-intentioned policy would put the country on the brink of insolvency. This is the danger of pump priming.

The effects of priming need to be studied more. Unlike businessmen, politicians mostly forget an event after a ceremonial launch. In the political world, priming can be more tempting and sweeter than the waiting game. But pumping water cannot whet the thirst of the people. Instead, politicians would have to face angry crowds when the water stops coming. If stimulation spills over to welfare policy, Korea could end up as another Greece.

What is more urgent than priming is innovation. The new government should come up with a program to renew a benign cycle for our economic habitat. Hiring should be pursued as part of a bigger outline for structural change. The supplementary spending should first go towards beefing up the social safety net, and other plans should be scrutinized for productive effect. Economic policy should be based on the dynamics of patience and resolution and pursued with balanced and farsighted wisdom.

*The author, a former commerce, industry and energy minister, is chairman of the North East Asian Research Institute.