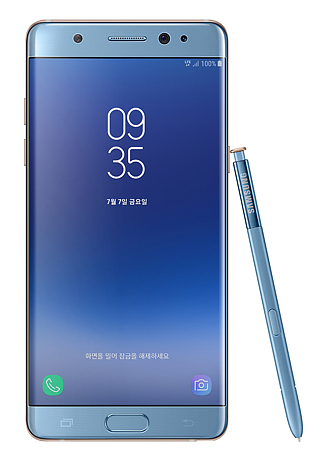 Samsung Electronics’ latest smartphone, which goes on sale in Korea today, is refurbished from leftover parts and unsold units of the company’s infamous Galaxy Note7, which was discontinued last year after cases of the phone catching fire.

The newest model, called the Galaxy Note Fan Edition, inherits the design and core features of the Note7 with a few exceptions. Samsung has upgraded the software in the Fan Edition and added voice-activated functions found in the Galaxy S8, which was released after the Note7.

Bixby Home can organize and sort apps on the screen based on how often they are used, and Bixby Reminder can keep track of users’ schedules and send location-based push notifications. 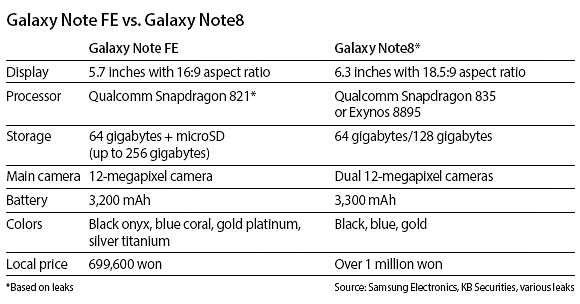 The Fan Edition has a 3,200 milliampere-hour battery, slightly less capacity than the 3,500 milliampere-hour battery in the doomed Note7. After the Note7 fiasco, Samsung concluded that the battery was responsible for the fires and subsequently designed stricter safety guidelines. The Fan Edition batteries have passed eight battery tests including one to check for any leakage of fire-prone organic compounds, according to the company. The S Pen stylus that came with the Note7 will be packaged in the Fan Edition. The refurbished model will also retain features like waterproof and dustproof casing as well as iris recognition.

Despite the improvements, Galaxy Note enthusiasts are hesitant about buying the Fan Edition because Samsung is expected to unveil the Galaxy Note8 at the end of August.

“At first I was interested in buying the Note FE because it is a limited and unique phone that inherits the design and features of the Note7 that I really liked,” said Park Seong-deok, a 31-year-old Seoul resident who had purchased a Note7. “But on second thought, buying the Note8 seems to be the better option because the Note7’s design seems kind of outdated after seeing the S8 models, and Samsung will probably add new features to the upcoming phone.”

Spec leaks of the Note8, reported the tech news outlet VentureBeat, suggest it will come with a 6.3-inch display and the same 18.5:9 aspect ratio of the Galaxy S8 and S8+ phones. The leaks claim the Note8 will be the first Samsung Galaxy phone to come with dual cameras on the back following a worldwide trend among smartphone makers.

The Note8 is expected to be powered by a 3,300 milliampere-hour battery, also less capacity than the Note7’s battery but still a safer option. Its price tag is expected to be over 1 million won. Some media outlets have reported the phone will be Samsung’s most expensive yet.

Korea’s three biggest mobile carriers, SK Telecom, KT and LG U+, have begun selling the Fan Edition with some promotional discounts for customers who purchase the phone with certain credit cards.

A spokesperson from Samsung said the 400,000 phones will only be made available for the Korean market. The company declined to say whether it plans to roll out the Fan Edition in overseas markets.