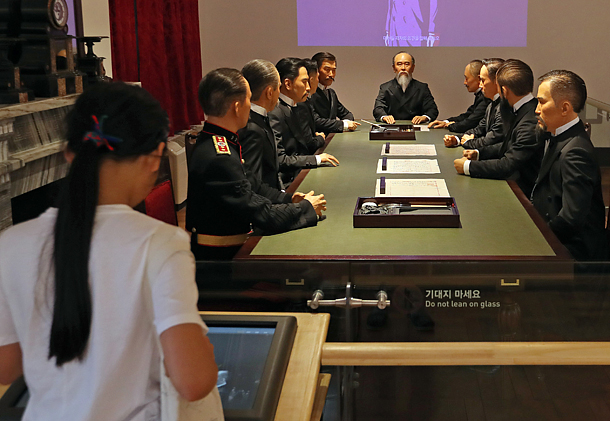 A visitor views a reproduction of the signing of the Eulsa Treaty in Exhibition Hall 2 of the newly renovated Jungmyeongjeon in Deoksu Palace, central Seoul. [YONHAP]

Jungmyeongjeon, the annex of Deoksu Palace in central Seoul where King Gojong (1852-1919), the penultimate king of Korea’s Joseon Dynasty (1392-1910), received foreign guests, recently completed a year-long renovation and opened its doors to the public on July 1. The renovation was of Jungmyeongjeon’s four exhibition halls.

According to the Cultural Heritage Administration, the updated halls are designed to emphasize the fact that this building was where the waning Korean kingdom had to sign, under pressure, a Protectorate Treaty with Tokyo in 1905, which set the stage for its colonial subjugation to Japan five years later. This arrangement ended when Japan was defeated at the end of World War II.

Exhibition Hall 1 sheds light on what kind of role Jungmyeongjeon played as an annex of the Deoksu Palace, while in Exhibition Hall 2 visitors can witness the moment the Eulsa Treaty - or Japan-Korea Protectorate Treaty - was signed. The signing of the treaty has been reproduced using wax figures.

Exhibition Hall 3 was renovated to highlight the aftermath of the Eulsa Treaty and the movement that opposed it. In Exhibition Hall 4 visitors can watch a video that shows how special envoys of the Korean Empire (1887-1910) engaged in various activities in an attempt to regain sovereignty.

The historic two-story building, which was designed by Russian architect Aleksey Seredin-Sabatin, was originally built to store the imperial family’s books and valuables. After a fire broke out in Deoksu Palace in 1904 it became a private space for Gojong.

Following the Japanese colonization, it became the place where Gojong greeted foreign guests. From the 1960s the annex was owned by a private company before the government purchased it back in 2005 and restored it to its original state.