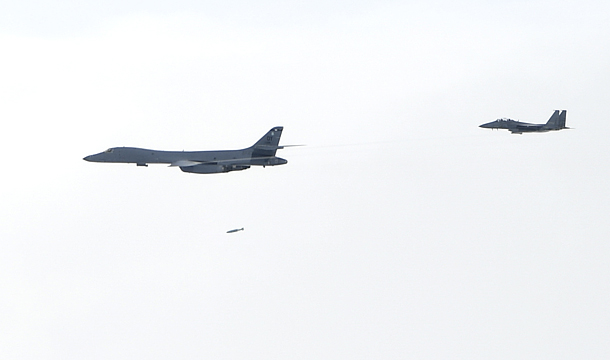 A U.S. Air Force B-1B Lancer drops an inert weapon on the Pilsung Range in Yeongwol County, Gangwon, Saturday, during a joint exercise with the South Korean Air Force. [YONHAP]

The bombers were joined by South Korean F-15 fighter jets and U.S. Air Force F-16 fighter jets for a joint exercise practicing attack capabilities by releasing inert weapons at the Pilsung Range in Yeongwol County, Gangwon, about 50 miles south of the inter-Korean border.

Gen. Terrence O’Shaughnessy, commander of Pacific Air Forces, said in a statement that the U.S. and its allies were trained, equipped and ready to unleash the “full lethal capability of our allied air forces.”

Lt. Gen. Thomas Bergeson, U.S. Forces Korea deputy commander, said the bombers and fighters were just two of “many lethal military options at our disposal,” continuing that the mission demonstrated the South Korean-U.S. alliance remains prepared to use the “full range of capabilities” to defend and preserve the security of the Korean Peninsula and the region.

On the way back to Guam, the B-1Bs joined Japanese F-2 fighter jets and flew over the East China Sea, according to the Pacific Air Forces.

North Korea quickly responded to the news Saturday in the Korean Central News Agency, its official mouthpiece, threatening that the allies’ “brigandish moves will only precipitate their own destruction.”

On Sunday, in its official newspaper Rodong Sinmun, the North warned the allies not to play the “game of fire above an explosive warehouse,” adding that a “small miscalculation or mistake could instantly trigger a nuclear war.”

The joint exercise was the latest among a series of military demonstrations by South Korea and the United States following North Korea’s launch of an ICBM last Tuesday, which the regime claims was successful.

Shortly after the test, North Korean leader Kim Jong-un said he had no intention of discussing his nuclear weapons or ballistic missile programs “unless the U.S. hostility policy and nuclear threat” to his country was “definitely terminated.”

The regime reiterated Kim’s stance in a statement issued Saturday by a spokesman from North Korea’s Foreign Affairs Ministry, in which the official said it was “high time the U.S. completely reoriented its strategic viewpoint” on North Korea and “give up its hostile policy” against the country.

“The U.S. will receive more ‘gift packages’ of different sizes from the DPRK in endless succession,” the statement, which was published in the Rodong Sinmun, read, referring to North Korea by its official name, the Democratic People’s Republic of Korea.

With all eyes now on a possible sixth nuclear test, 38 North, a website on North Korean affairs, wrote last Friday that commercial satellite imagery from June 28 to last Wednesday indicated “no significant new activity” could be observed but additional nuclear tests could occur at any time once the North Korean leadership makes the decision to do so.

“There does appear to have been an overall clean-up of the facility,” the website wrote, “giving the impression of an unusually well-maintained site at a high state of readiness to host another underground nuclear test on short notice.”