Jong-un surrounds himself with munition men

Jong-un surrounds himself with munition men 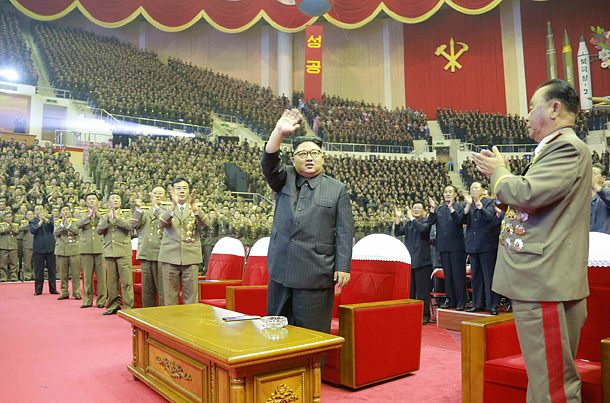 The front page of North Korea’s state-run newspaper Monday featured a smiling Kim Jong-un waving his right hand at columns of men, most of whom were in military uniforms.

Days after the country claimed to have successfully tested an intercontinental ballistic missile capable of reaching the U.S. mainland, top officials gathered in Pyongyang Sunday for a grand concert celebrating the regime’s latest feat.

But what caught the attention of North Korea watchers were the people standing closest to the young leader. It wasn’t the usual lineup of Kim Yong-nam, president of North Korea’s parliament; Hwang Pyong-so, director of the Korean People’s Army’s General Political Bureau; Pak Pong-ju, the premier; and Choe Ryong-hae, vice chairman of the Central Committee of the Workers’ Party of Korea.

Though unnamed in Rodong Sinmun’s article, the new members of Kim’s literal inner circle were the country’s top scientists and weapons developers, the officials in charge of the regime’s nuclear and missile development programs: Ri Pyong-chol, first deputy director of the Workers’ Party’s Munitions Industry Department; Kim Jong-sik, deputy director of the same department; Jang Chung-ha, head of the Academy of National Defense Science; and Jun Il-ho, a member of the Workers’ Party’s Central Committee.

These were the same officials that flanked Kim Jong-un last Saturday when senior officials visited the Kumsusan Palace of the Sun, the country’s sacred mausoleum for former leaders Kim Il Sung and Kim Jong-il, to mark the 23rd anniversary of Kim Il Sung’s death.

“Kim Il Sung was hailed as North Korea’s founder, and Kim Jong-il is remembered as the leader who led the North Korean regime through the infamous famine of the late 1990s,” said Jeon Hyun-joon, director of the Northeast Asia Peace and Cooperation Research Institute.

“Kim Jong-un’s PR strategy relies on the promise that he will protect his country with nuclear weapons and missiles,” said Jeon. “It’s also a sign that Kim Jong-un will never give them up.”

Ri retired from the air force in late 2014, only to reappear in the North Korean media last April during a parliamentary meeting wearing a military uniform. It wasn’t until recently that he showed four stars, meaning he had been promoted to general.

Another South Korean government official said North Korea appears to have elevated the Strategic Rocket Forces, which formerly was a division under the General Staff Department of the Korean People’s Army, to bring it directly under the control of Kim Jong-un, enabling the leader to have a closer look into the regime’s nuclear and missile programs.