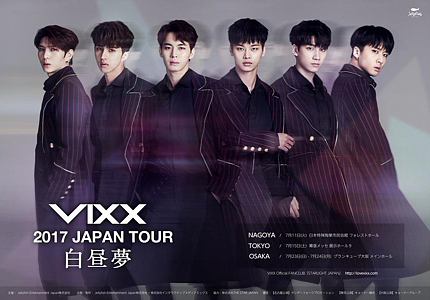 Boy group VIXX will kick off a concert tour of three Japanese cities in Nagoya, Japan on Tuesday, its management agency said.

The group will continue in Tokyo on Saturday and Osaka on July 23-24, according to a release from Jellyfish Entertainment.

The tour is part of the VIXX V Festival, which marks the fifth anniversary of its debut and the release of its fourth EP album, “Shangri-La,” according to the agency.

During the tour, the members will perform “Depend on Me,” the title song of the group’s first full-length album, which swept Japan’s Oricon music charts, and Japanese-language versions of many hit songs.

After leaving Japan, the group will begin a fan meeting tour of Southeast Asian countries on July 27.