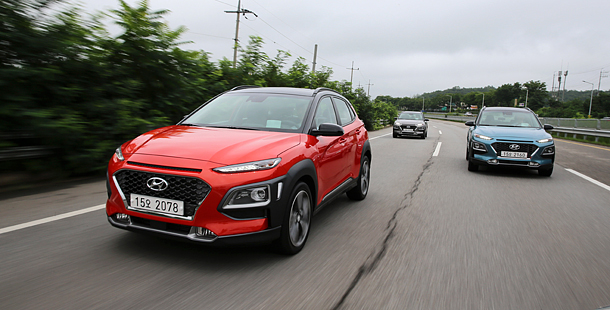 Hyundai Motor might be a late mover in the burgeoning small SUV market, but the automaker’s new Kona demonstrates that patience does have its rewards.

Based on a test drive session offered to the Korean press on Tuesday, Hyundai’s two-year delay in entering the market compared to its competitors looks like it will pay off for Korea’s top carmaker. The Kona, named after the island in Hawaii, is recommended for novice drivers who want to use their cars mostly in an urban environment and for the occasional weekend getaway. 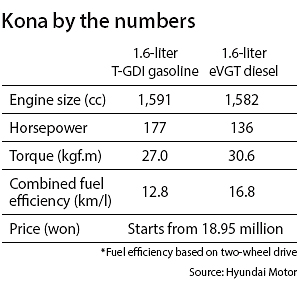 To get a more detailed look at the carmaker’s first global small SUV, this reporter got behind the wheel on a 108-kilometer (67-mile) drive between Yeouido in western Seoul and Paju in Gyeonggi, a route that includes highly congested urban roads and relatively open highways.

One of the Kona’s most notable features is its smart car technology that is undoubtedly at the top of its game, at least among domestic competitors. The car comes with sensors and cameras that can warn of forward and rear collisions, help drivers keep inside lanes, let them know when it’s safe to change lanes, detect blind spots and turn off the high beam at night when a car approaches. No rival Korean SUV, neither SsangYong Motor’s Tivoli, Renault Samsung’s QM3 nor GM Korea’s Trax, offers all six functions. 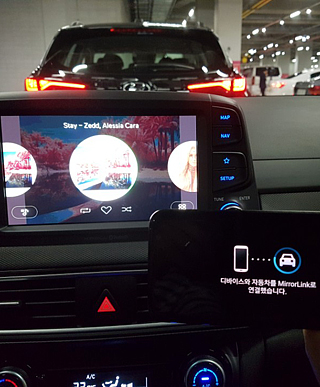 A MirrorLink app developed with Melon deactivates the phone when it connects to the car’s infotainment system. [JIN EUN-SOO]

Such advanced safety features might appeal to the novice driver. When driving at over 100 kilometers an hour on an empty highway, for instance, it’s very easy to drive with one side of the car stepping over the next lane.

However, the Kona’s lane-keeping assist helped the car stay within bounds the whole time, even on a sharp curve, making it feel as if the car was almost driving on its own.

And when this reporter needed to shift three lanes to exit a busy highway, the car was able to send a signal telling the driver when it was safe to change lanes. A small car-shaped sign on the side mirror flickered when the Kona spotted other vehicles in the adjacent lane.

A piece of glass behind the steering wheel - actually the head-up display - gives the driver access to information like maps, the car’s speed and fuel efficiency.

For drivers who are uncomfortable with turning their heads to glance at a navigation screen or phone, the head-up display will surely come in handy. Another convenience is wireless phone charging located on the bottom of the center console.

While many of the new features are impressive, some have turned out to be total flops. One of them is the music service offered in collaboration with Korea’s top streaming provider Melon. Last month, Hyundai Motor and Melon launched an app for the automaker’s cars that utilizes MirrorLink technology to better connect smartphones with the vehicle.

In contrast with Bluetooth, the usual method of wirelessly connecting a phone with the car’s entertainment system, the app, which is only available on Android, lets users connect their phone to the car via USB.

It’s a simple process, but once the two systems connect and the Melon page comes up on the car’s center console, it actually locks your phone. No text messages can be sent and no phone calls can be made while the app is running.

The touchscreen can also be slow and unresponsive when trying to change music. In the end, this reporter found it was just more convenient to use Bluetooth.

The Kona’s driving performance is above average compared to cars in the same segment. With a 1.6-liter turbo gasoline engine, its maximum horsepower is 177 and torque is 27 kilogram-force meters. The combined fuel efficiency for two-wheel drive is 12.8. In comparison, the current market leader Tivoli generates horsepower of 126 on a gasoline engine.

Yet it was difficult to notice a clear distinction in terms of driving performance. The sound from the wind and road surface was still loud when surpassing 120 kilometers an hour. But then again, there’s little to expect from a compact SUV.

The Kona may be small, but Hyundai Motor is betting big on the car to make up for dwindling sales this year. The car was launched in Korea last month and will be released in Europe in August and the United States in December.

The automaker is banking on the Kona to revive falling global sales, riding on the worldwide popularity of small SUVs.

The domestic price starts from 18.95 million won ($16,540), but can easily go over 20 million won with added safety and convenience features.