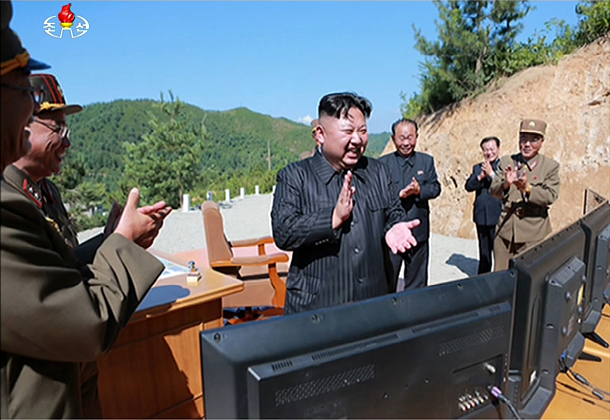 Why does Kim Jong-un continue to provoke with tests of nuclear weapons and missiles? What does he want, and what is he afraid of? We must answer these questions before producing any effective policy or declaration on North Korea. Unless we understand Kim’s reasoning, President Moon’s approach of freezing Pyongyang’s nuclear weapons program as an impetus for talks, and denuclearization as an exit won’t happen because North Korea will not come to the negotiating table.

Kim advocates parallel pursuit of nuclear and economic development as a national strategy, which is often considered political propaganda in South Korea. But it is a rather desperate move for Kim. With second-strike capability, external threats can be eliminated, and resolving economic issues will also get rid of internal challenges.

Kim wants a long reign in North Korea, and he is trying to convince the people that nuclear and economic development is for them, not him. But in the process, he made the mistake of exposing the “top secret” that he is most afraid of.

The simultaneous pursuit of nuclear and economic development shows that Kim is afraid of external threats and internal challenges at the same time. The former is widely known, but the latter had been hidden and is now revealed. North Korean residents no longer rely on rations. They make a living out of market activities, and in order to win their continued support, Kim needs to improve the economy.

Kim announced the dual nuclear-economic development approach in 2013 because he was confident in the economy at the time. Based on my research and estimates, North Korea’s gross domestic product went up by nearly 3 percent annually from 2011 to 2013. The price of minerals was soaring, exports and overseas dispatch of workers increased, and it almost felt like foreign currency was overflowing in North Korea.

South Korea needs to have a strategy to attack the North’s economy, considered the Achilles’ heel of Kim Jong-un, and bring down his confidence. Policies on North Korea will succeed when they create a structure that impairs its trade and markets if it continues with nuclear development and missile tests. Now that the bureaucrats have learned the power of money and the people are no longer starving, they will not want to go back to the “Arduous March.” Moreover, if people discover that Kim’s nuclear and missile development caused their economic crisis, Kim will find it harder to maintain power the more he sticks to weapons development.

North Korea policy based on Kim’s code for survival needs to include the following three conditions. First, leadership on sanctions needs to be established until the government can negotiate a freeze to North Korea’s nuclear program. Experts largely agree with Moon’s mid- and long-term North Korea policy. However, to implement them, sanctions must succeed first. The government may have missed the balance initially. If the president emphasizes the mid- and long-term vision, officials may not bring up sanctions. The possibility of successful sanctions could be undermined if South Korea is reluctant and much less cooperativee with other countries.

Second, Seoul needs to cooperate with Washington to strengthen sanctions. While stopping oil supplies is most effective, China is not likely to accept it. In this case, the new UN Security Council sanctions should include a clause that also restricts members’ import of iron ore from the North as it did for anthracite. From March 2017, China officially stopped importing North Korean anthracite, but iron ore imports are surging, and they are disguised as being for “livelihood purposes.”

If China or Russia opposes the plan, the U.S.-led secondary boycott on North Korean minerals can be considered. According to my research, most of the North Korean mineral-exporting companies serve as a major funding source for the military and party, which provides ample grounds for sanctions on iron ore.

Third, Russia should be asked to reduce the number of North Korean workers there. As more than 40,000 North Korean workers are dispatched to Russia, the money they send home is the biggest source of foreign currency for the North Korean regime. Of course, Russia will want something in return. Seoul could promise to participate in Russia’s Far East development project or express intention to import Russian gas or petroleum using pipelines going through the North if nuclear negotiations go well.

We cannot afford to repeat the old story about North Korea with outdated policy, and without understanding Kim’s code for survival. If we don’t contemplate enough and simply follow the old path, the policy will fail again. Another failure is quite frightening because it could put the Korean Peninsula on the verge of another war. Now is the ironic time that peace can be achieved only if sanctions succeed.