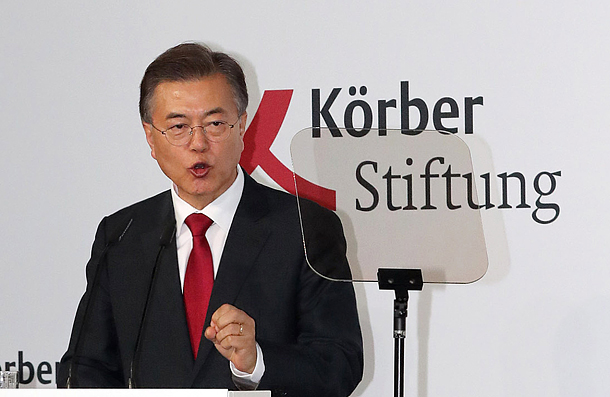 On July 8, President Moon Jae-in told Canadian Prime Minister Justin Trudeau that the Korean Peninsula is in its most serious crisis since the Korean War. During the G-20 Summit, the two leaders had the first talk at a corner of the meeting hall. As Canada is also within the range of North Korea’s intercontinental ballistic missile (ICBM), President Moon may be appealing to the sympathy of the young Canadian leader.

Has Moon changed? My hunch was right. At the first cabinet meeting after he returned from the trip on July 11, Moon said, “The Korean Peninsula issue is the most critical, but we don’t have the power to resolve it or induce an agreement. We need to understand the painful reality.” It was a solemn remark after his first bilateral and multilateral summits.

The field is shaking. Since the first North Korean nuclear crisis in 1993, two myths related to North Korea spread in the international community: The United States cannot use force against North Korea and China would never give up North Korea. Twenty-four years later, leaders of the United States, China and Korea could not prove these to be true. But lately, U.S. President Donald Trump is tackling the myth on China.

“The painful reality” Moon refers to is related to the unusual tension between the United States and China. On July 7, U.S. Secretary of State Rex Tillerson criticized China, saying its efforts to persuade North Korea have not been consistent. Washington’s intention is clear. It demands that China make a clear move to convince North Korea to give up nuclear and missiles development. If not, the United States is willing to fight. In fact, there are signs that the United States is about to begin secondary boycotts aimed at China. A foreign ministry official reported that President Trump is determined.

At the beginning, Moon emphasized a two-track policy of pressure and talks. But the emphasis seemed to be on talks. But after the Korea-U.S. and G-20 summits, he is highlighting “joining the pressure of the international community” and “asking China’s bigger role.” The president’s language would not change overnight, and there are reasons for sudden changes.

At the Körber Foundation on June 6, Moon presented the Berlin Plan, urging denuclearization and improved inter-Korean relations. In the speech, he said, “I hope that North Korea will not cross the bridge of no return.” Moon’s words projected determination and desperation.

For the first time since World War II, a hegemon and a rising power are flexing muscles. The United States is not going to play the old tune that’s been played for 24 years. It is a strategy that won’t end unless one side bends. It is the most serious crisis since the Korean War indeed.