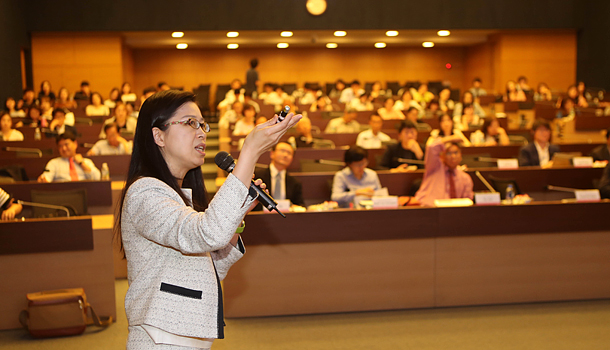 Wang Tsung-hsi, secretary general of Taiwan’s Ministry of Health and Welfare, speaks at the 1st International Forum for 4 East Asian Countries with Low Fertility Rates at the Korea Chamber of Commerce in central Seoul Thursday, addressing government officials and experts on the issue from countries including Korea, Singapore and Hong Kong. [SHIN IN-SEOP]

Welfare officials and experts weighed in on the issue of low birth rates, a shared and urgent problem in Korea, Taiwan, Singapore and Hong Kong, sometimes referred to as the “East Asian Tigers,” during an international forum in Seoul on Thursday.

“For the last 15 years our total fertility rate has been less than 1.7 on average,” said Lee Dong-wook, a policy manager of the Korean Welfare Ministry’s Office for Population Policy. “Korea is suffering from a very low fertility rate, and if this trend continues, this will negatively effect Korea’s economic growth and national strength.”

The 1st International Forum for 4 East Asian Countries with Low Fertility Rates, hosted by the JoongAng Ilbo and Ministry of Health and Welfare, was held at the Korea Chamber of Commerce in central Seoul Thursday.

“Korea is standing at the brink of collapse of our population,” Kim said. “This crisis will effect our economy, society and defense.”

Korea’s fertility rate was 1.17 in 2016. The number of children born this year is expected to be the lowest ever.

“Our four countries once used to be called the four dragons of Asia,” said Lee Kang-ho, the Korean Welfare Ministry’s director-general of the bureau of population and child policy. “Now we are all suffering from low fertility.”

This included introducing child care subsidies for low-income families in the first basic plan, which spanned from 2006 to 2010, and supporting state-backed child care and work-life balance policies in the second plan, which ran from 2011 to 2015.

Now, in the third basic plan, which kicked off last year and runs through 2020, the government is focusing on addressing structural issues such as stable employment, affordable housing and accessible education.

The Korean government spent 19.7 trillion won ($17.3 billion) in the first plan, 61 trillion won in the second and its budget is expected exceed 108 trillion won for the third plan.

“Our low birth rate is partly because of the success of family planning slogans back in their time,” she said, pointing to slogans calling for family planning in the 1970s.

Paulin Straughan, a sociology professor at the Singapore Management University and consultant on the fertility issue to the government, pointed to the perceived barriers and actual barriers related to delayed marriage and child birth.

She said that studies show Singaporean youths have strong aspirations to marry and have children.

“We tell the government this is important,” Straughan said, “because the minute such aspirations change, things go downhill. But there is dissonance between ideals and practice.”

Some of the main barriers to raising the total fertility rate include the perceived cost of child rearing and an increase in the proportion of single people.

She said the top reason cited by singles for not marrying is: “I have not met a suitable partner yet and I want to concentrate fully on my job, studies or I don’t have enough money.”

She added, “Singles in Singapore have a hard time finding a partner. They don’t have time to date. Real barriers .?.?. include a lack of leisure time, and as a result young Singaporeans do not have the opportunity to expand their social circle.”

She also pointed out that barriers in child care are arising from the changing family structure, compared to 10 or 15 years ago, when grandparents would live in the same household or nearby.

“There are also intangible costs, such as the perceived cost of child care, as well as social norms and self-policing by women,” Straughan said. Women feel they have to choose between a successful career and meeting the high expectations of being a responsible mother, she said. “It is about raising an Einstein or the next president.”

She continued, “Everything you can do, I believe the Singaporean government has already done,” including providing married couples with significant housing subsidies.

She also called for education reform, a decrease in competitiveness and criticized the cost of supplementing learning with private academies and classes, problems that also exist in Korea.

Kim Jong-hoon, a researcher with the Korea Institute for Health and Social Affairs, said the major four East Asian economies have in common their extreme and prolonged low fertility rates, trends of delayed marriages and childbearing, shrinking household sizes and shared cultural, historical heritage based on Confucian values.

The new Moon Jae-in administration has set forward approaches for overcoming the low fertility rate, including making child care the responsibility of the government, promoting employment, housing and education and strengthening the social response system.

“The important thing is getting married,” said Paul Ip, chair professor of social work and administration at the University of Hong Kong. Despite some policies supporting subsidies for families that have a third and fourth baby, he said, “They have very little impact on the total number of births. More important is for someone with no baby to have one baby.”