Yeom Ki-hun may have shot at national team

Yeom Ki-hun may have shot at national team 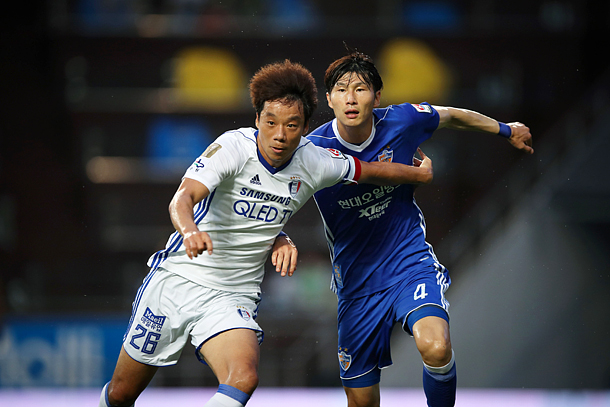 Despite the negativity he received for being on the Korean national team, Yeom Ki-hun, a winger for Suwon Samsung Bluewings, is ready to represent Korea for the first time since 2013.

“For me, being on the national team is more of an honor than a fear,” Yeom said.

During the final World Cup qualification match against Argentina in 2010, Yeom became more a source of trouble than a hero. While the team was losing 2-1, Yeom was given a chance to score, but missed it, kicking with his left foot rather than his right.

At the time, Yeom was given an opportunity to join Birmingham City F.C. in the English Premier League, but refused the offer to focus on the World Cup. He had given up a lot to play in his first World Cup, but he wasn’t selected for the final entry.

When Uli Stielike, the former head coach of the Korean national football team, began creating the team with younger players, Yeom’s chances of getting back on the team shrank even further.

But Shin Tae-yong, the team’s current head coach, recently announced his standards regarding player selection during his first press conference, and Yeom’s odds have subsequently improved.

“I will select players who are at their best condition so the team can win the remaining two final World Cup qualification matches,” Shin said. “Age is just a number. There is a possibility of older players like Yeom Ki-hun being selected.”

Shin’s statement has been a great motivator for older players in the league, but Shin has paid closest attention to Yeom.

“His statement made me play harder in every match,” Yeom said.

Currently, the Korean national team is in need of a left winger, as Son Heung-min of Tottenham Hotspur was injured in a qualification match against Qatar in June. Though Son is recovering at a fast pace and has a high possibility of joining the national team even if he doesn’t fully recover, it is still uncertain whether he will be able to actually play in the upcoming matches.

“For athletes, being on the national team is a great honor,” Yeom said. “So I want to challenge myself. But even if I don’t get selected, I’m certain that the players will win the next two matches and lead Korea to the 2018 FIFA World Cup in Russia.”

Yeom’s left foot shot has gotten stronger since 2010. During Suwon’s match against Incheon United at the Suwon World Cup Stadium on Wednesday, Yeom and Jonathan De Silva Wilela led Suwon to defeat Incheon 3-0. During the game, Yeom recorded one goal and one assist.

Also, during Suwon’s most recent match against Pohang Steelers on Saturday, Yeom recorded another assist to lead the category in the K-League along with Kim Young-uk of Jeonnam Dragons, with seven each.

If Yeom ends another season leading in assists, it’ll be his third consecutive year to do so. He is also five away from his 100th career assist.