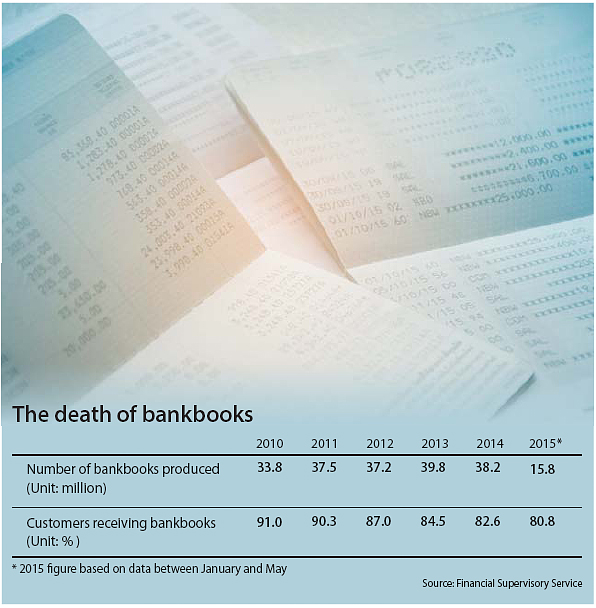 The bankbook, a passport-size ledger issued by banks to help customers keep track of their cash withdrawals and deposits, might seem passe in the age of online banking, but in Korea, 80 percent of people still use the paper method to record their transactions.

The country’s financial authorities, though, see the practice as inefficient and outdated, and unveiled a plan two years ago to scale back the use of bankbooks.

On Tuesday, the Financial Supervisory Service offered more details of the plan amid concerns that eliminating paper records will marginalize an older demographic that is not accustomed to online banking.

The regulatory agency in charge of the country’s banking industry said it would not completely halt the issuance of bankbooks, but starting in September, banks will only issue the books if clients request them.

“The change is that people will be asked if they want a bankbook when creating a new account,” said Gwak Beom-joon, head of the bank supervision department at the Financial Supervisory Service. “Many people misunderstood the policy as banning banks from issuing any books, which is not true.”

Banks will be required to issue bankbooks to people over the age of 60 for free.

The Financial Supervisory Service’s plan to roll back the use of bankbook includes three phases.

In the first phase, which ends in August, the agency is encouraging banks to establish incentives and benefits for those who opt out of bankbooks.

The second phase, from September this year to August 2020, includes requiring banks to issue books only when clients request them or for people older than 60.

In the final stage, after September 2020, clients will have to pay additional fees for the bankbook, though people over 60 can still get one for free.

Since Koreans are not accustomed to paying fees for bankbooks, the Financial Supervisory Service’s initiative could run into public opposition.

“I don’t think it is fair for banks to charge for bankbooks,” said Kim Mi-kyung, 53. “It is the client’s right to have a bankbook, and issuing them is not some kind of exclusive service that banks offer.

“And even if the regulator or banks can save on costs, what are the benefits that consumers can receive in return?”