Samsung and KT vow to boost their recruiting

Samsung and KT vow to boost their recruiting 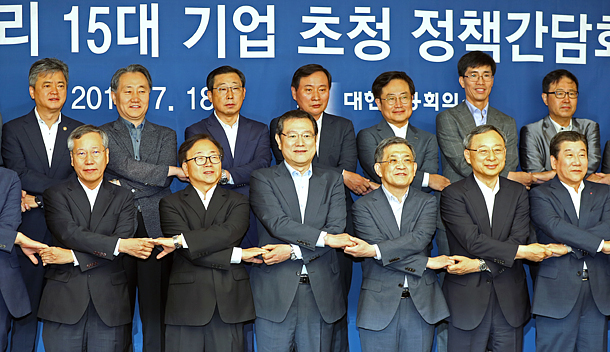 Lee Yong-sup, vice chairman of a presidential committee devoted to generating jobs, third from left in the front row, and executives from 15 businesses join hand in hand after a meeting on Tuesday about job creation at the Korea Chamber of Commerce and Industry building in central Seoul. [YONHAP]

In response to the Moon Jae-in administration’s push to generate more jobs, Samsung Electronics and KT on Tuesday promised to beef up their new hires in the latter half of the year.

Other major businesses are expected to follow Samsung’s lead.

Kwon Oh-hyun, vice chairman of Samsung Electronics, made the announcement as he walked out of a meeting of 15 major companies and Lee Yong-sup, vice chairman of a presidential committee devoted to generating jobs. The Korea Chamber of Commerce and Industry, the lobbying group representing local businesses, arranged the meeting to discuss job policies.

“When the global economy is on the track of a slow recovery, the best way for Korean companies to create more jobs would be investing proactively,” said Vice Chairman Kwon in a speech at the beginning of the meeting.

But he did not specify how many new entry-level workers the tech giant would hire or how it compares to the recent past.

Hwang Chang-kyu, chairman of KT, Korea’s second-largest mobile carrier, told attendees that the company would employ 4,000 fresh-out-of-college recruits in the remaining months of 2017. The company hired 6,000 in the first six months.

“Now is the golden time for job-related policies,” said Lee of the presidential committee during the meeting. “We hope that [large corporations] take the lead in producing quality job positions.”

“We are refurbishing regulations and systems so that companies coming up with more employment would receive various incentives in terms of tax, budget, procurement and rewards.”

The other 13 companies that participated in the meeting included Hyundai Motor, LG Electronics, Kia Motors, Emart, SK Hynix, Lotte Shopping and LG Display as well as five small- and medium-sized companies. The list of companies differed from similar meetings organized by previous administration.

The presidential committee focused on the number of employees of the companies, while in the past, companies’ assets determined whether they were invited.

The committee explained that the new standard is an indication of the Moon government’s focus on job generation.

Leading conglomerates that were excluded from the meeting included Hanwha, SK, Lotte and Posco.