Though Korean ice hockey is not at the level to compete against the world’s top ranked teams, Jim Paek, head coach of the men’s team, and Sarah Murray, head coach of the women’s team, showed confidence during the media day at the National Training Center in Seoul on Wednesday in their abilities to lead the teams to victory at the 2018 PyeongChang Olympics.

“My expectation is gold, absolutely,” Paek was quoted as saying by Yonhap.

“We’re going to go into every game with the intention of winning,” Murray was quoted as saying by Yonhap.

Up until this season, ice hockey wasn’t considered big in Korea, as they were ranked among the bottom of the world and had never participated in the Olympics. But once Chung Mong-won, head of the Korea Ice Hockey Association (KIHA), started the “PyeongChang Project” upon his arrival in 2013, ice hockey in Korea started to develop.

To improve the men’s team, Korea recruited Paek, former defenseman of the Pittsburgh Penguins, and brought in several naturalized athletes from Canada and the United States.

Within three years, the team reached its peak during the 2016-17 season, ranking 21st in the world and finally getting promoted to the International Ice Hockey Federation (IIHF) World Championship, the top division. 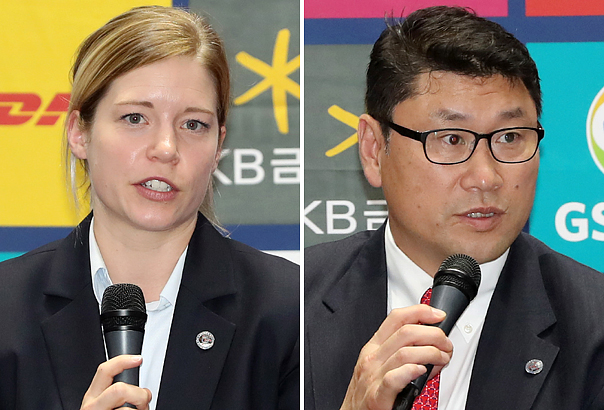 And the women’s team had their success with Sarah Murray, former U.S. collegiate ice hockey player, as their new head coach by moving the team’s IIHF world ranking up to 22nd for the first time in 10 years.

“In order for us to be successful, we have to think and act like an elite team,” Paek was quoted as saying by Yonhap. “Win or lose, I don’t have the crystal ball. But I know we’ve prepared extremely hard for the last three years.”

“In our group, if you have a good goalie and have someone score lots of goals, there are chances of things happening,” Murray was quoted as saying by Yonhap. “We’re going to play to win and make sure we won’t have regrets after the game.”

During the media day, Chung attended and held a presentation about their plans after the Olympics and “Roadmap to PyeongChang.”

“The growth in Korean ice hockey must continue after the PyeongChang Olympics,” Chung said. “We need to prepare for after the Olympics.”

Chung said his goal is advancing to the 2002 Beijing Olympics. To make that possible, he said he plans to extend the contract with Paek and Murray.

In addition, Chung talked about the recent issue of having a joint ice hockey team with North Korea at the upcoming Olympics. Though the two countries will have to come to an agreement, Chung said that the KIHA will put their best effort into not letting the decision affect the players and make sure the opinions of players are considered.

“There’s no need for the association to exist if they can’t protect the players,” Chung said.