Jeju players get their penalties reduced for on-field brawl

Jeju players get their penalties reduced for on-field brawl 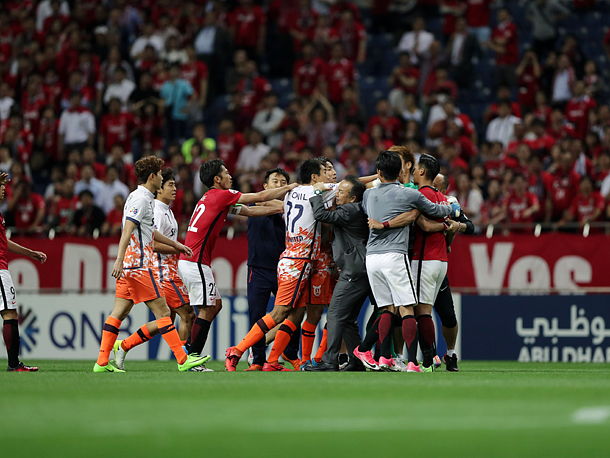 Jeju United and the Urawa Red Diamonds get in an on-field brawl during the Asian Football Confederation Champions League’s round of 16 match in May. [K-LEAUGE]

Korean football club Jeju United said Thursday that penalties on their players for on-field violence during a regional club tournament were reduced following a decision from the continent’s governing football body.

The Asian Football Confederation (AFC) had earlier handed down a six-month ban for Cho Yong-hyung, a three-month suspension for Baek Dong-gyu and a two-match ban for Kweon Han-jin for their role in a melee after an AFC Champions League (ACL) match against the Urawa Red Diamonds at Saitama Stadium in Saitama, Japan, on May 31.

But Jeju said the AFC recently confirmed that Cho’s suspension will be cut down to three months, while Baek will be suspended for two months after reviewing the K-League Classic club’s appeal.

The AFC added that Cho will have a probation period of one year and will be given three month-suspension if he is involved in a similar incident.

During the second leg of their ACL round of 16 series, Cho was sent off on his second yellow card in the 81st minute for a hard tackle on Shinzo Koroki. Then after the match, Baek, an unused substitute, came charging off the bench and struck Yuki Abe with an elbow.

Following the AFC ruling, Cho will be able to play for Jeju from Sept. 9 against FC Seoul in the domestic league, while Baek will be available from Aug. 13.

Jeju said they submitted a petition from the players and a written oath to the AFC that they will not commit the same actions again.

“We told the AFC that some Urawa players provoked our players first, and Cho’s tackle wasn’t intentional,” the club said. “We accept the AFC decision and will try our best to prevent such incidents from happening again.”