A look at the mastery behind Korean red ginseng

A look at the mastery behind Korean red ginseng

Cheonsam, which translates to heaven root, is considered the most valuable red ginseng product among other variations at CheongKwanJang. It needs to have balanced proportion externally and even density internally. Only 0.5 percent of the red ginseng production is granted this grade.

Behind this is a small garden with a metal machine that seems to have been used during ancient times.

Upon entering the building, everyone must change into white paper gowns and sanitary covers for their hair and shoes. Then they wash their hands and pass through an air shower for further sanitization.

Next, visitors are allowed to take a close look at the manufacturing process of hongsam, or Korean red ginseng.

This location is a manufacturing plant for Korea Ginseng Corp. (KGC), best known for its red ginseng brand CheongKwanJang. It is 180,000 square meters (1,937,504 square feet) and has been located in this city for the past four decades. It is known to be one of the world’s biggest ginseng factories and produces 8,000 tons of product every year.

Various types of products can be made from red ginseng, such as thick extract, condensed capsules and blended tonics.

But the most valuable product is cheonsam, or “heaven root.” Cheonsam is a top-grade whole-root product that passes strict qualifications for size, shape, internal structure and components.

Visually, cheonsam must have its head, body and leg balanced in proportion to resemble the shape of a human body. Internally, it should be uniformly dense. Red ginseng with a dense internal structure is known to have more active components such as saponin, which is believed to reduce cholesterol and boost the immune system.

Only 0.5 percent of red ginseng production is labeled cheonsam.

“It’s a meticulous inspection process that cannot be done by machinery,” said Kim Hyo-jeong, director at the factory, who gave a tour when the Korea JoongAng Daily visited on July 14.

“That last detail cannot be spotted by machine,” she added. “The part of the factory that makes cheonsam products will continue to be overseen by people.”

Among the 700 workers at the factory, only 12 are qualified to inspect a root’s internal structure. This step takes place inside a darkroom with the help of a flashlight to better see through the root. These “hongsam masters” have at least 20 years of experience sorting red ginseng and have to pass the company’s internal exam.

Living up to its reputation as a luxury health food, there is an extra grade for the top-tier cheonsam products, called cheonsam 10-ji. There are additional qualifications for weight and thickness for this grade.

Only 0.02 percent of red ginseng is labeled cheonsam 10-ji and is released with a fixed price tag of 6.2 million won per 600 grams. According to KGC, more than half of that is exported, so there is a six-month wait to buy this product in Korea.

“In China, they are bought for two or three times more than the standard price,” the company spokesman said.

Because of such uncompromised quality and rarity, cheonsam products were given as state gifts to Queen Elizabeth II of the United Kingdom, Pope Johan Paul II, Jiang Zemin, former leader of China and the current leader, Xi Jinping, during their visits to Korea.

“People enjoy cheonsam in various ways,” the spokesman said, “such as boiling it with water to drink or floating the sliced cheonsam in water to enjoy a more subtle flavor.” 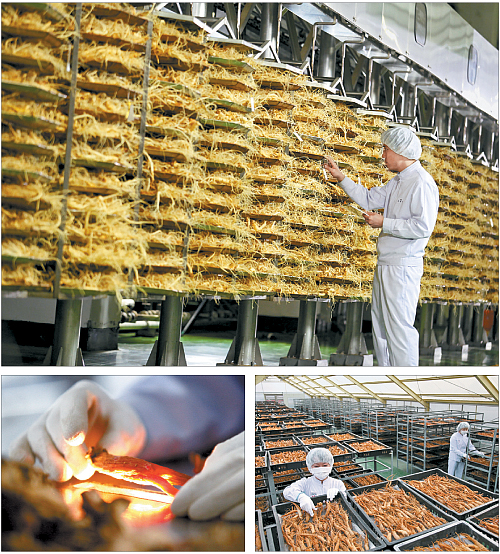 It takes a total of eight years to harvest a single batch of Korean ginseng. It takes two years to select the right farmland and fertilize the soil. Then it takes another six years to actually cultivate the ginseng. KGC has been cultivating six-year-old ginseng for its entire red ginseng products because they have maximum nutritional value, the company said.

During the eight-year cycle at directly contracted farmlands across Korea, KGC workers are dispatched seven times to check on the status of the roots. There are more than 290 standards by which the crop is evaluated.

“Even if a single category doesn’t meet our company’s standard, the entire ginseng harvested from that farmland will not be used as raw material for our CheongKwanJang products,” Kim said.

The ideal harvest time for ginseng is between September and October. The harvested fresh Korean ginseng is washed before going into a self-developed steamer at the Buyeo factory. Then it goes to the rooftop to be naturally dried. After 15 days of drying, it changes its color to dark red, finishing its transition to red ginseng.

“Under the right treatment and condition,” Kim said, “the amount of saponin contained in hongsam nearly doubles when compared to just ginseng.”

But all is not analogue at this factory. Passing through a corridor leads to a separate area where machines take center stage. This is where other CheongKwanJang products such as extracts, capsules and tablets are made. Mixing, blending and fermenting processes are done here. Liquid products, such as those in pouches and bottles, are manufactured in KGC’s second factory in Wonju, Gangwon.

KGC holds a number of certifications to reassure consumers of the quality and hygienic condition of its red ginseng products. It received good manufacturing practice GMP certification from Korea as well as from Australian and Saudi Arabian authorities. Also, the company received six certifications by the Korea Laboratory Accreditation Scheme in areas such as quality management system and inorganic components analysis. The Buyeo factory’s food safety control received the government-certified HACCP recognition.

The factory as well as the ginseng museum adjacent to it is open to the public by reservation.