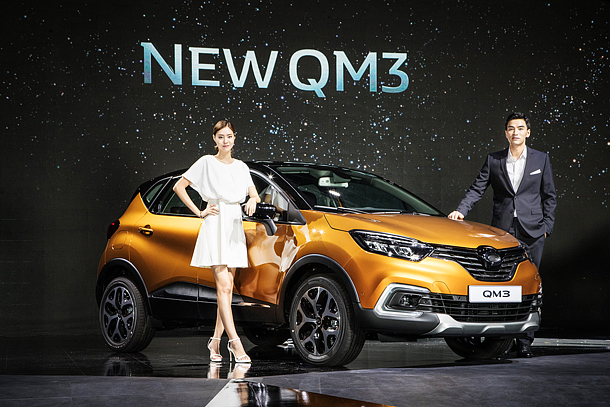 Models pose with the updated QM3 from Renault Samsung Motors during a press conference in eastern Seoul on Wednesday. [RENAULT SAMSUNG MOTORS]

“[The new QM3] comes from the heritage of the Renault Captur, which has ranked top in the small SUV market in Europe for three straight years since 2014,” said Park Dong-hoon, the CEO of Renault Samsung, the Korean unit of French auto giant Renault Group, at a press conference in eastern Seoul on Wednesday.

“Its design can be defined as ‘French chic,’ sharing a look with the SM6 and QM6.” The SM6 is the company’s mid-sized sedan while the QM6 is its premium SUV. 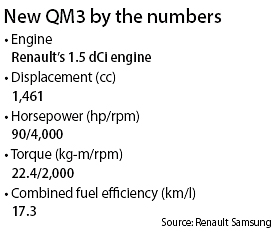 While its front - mainly the grille, headlamps and fog lights - underwent some changes to mirror the SM6 and QM6, the automaker maintained what had been considered the main weapon of the previous model, its market-leading fuel efficiency.

The new QM3 comes with a 1.5-liter diesel engine that, according to the carmaker, has reduced engine noise while increasing fuel efficiency. The combined gas mileage of the vehicle is 17.3 kilometers per liter (40.7 miles per gallon).

The release of the new QM3 is expected to yet again stir up the already-heated small SUV market.

The local market is getting more saturated with top automaker duo Hyundai Motor and Kia Motors recently throwing their hats into the ring.

Among the small crossovers on the market, the Stonic will likely be the main rival of the new QM3. According to Kia, it gets about 17 kilometers per liter in combined fuel efficiency, nearly equivalent to that of the new QM3.