Kia’s Stonic goes back to basics

Kia’s Stonic goes back to basics 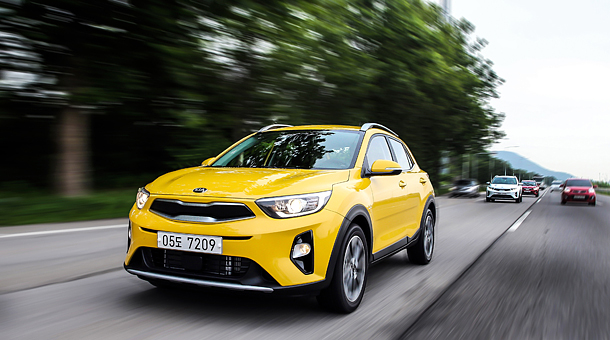 Kia Motors’ Stonic is a car that keeps things simple. In a growing small SUV market, Kia is hoping that concentrating on the basics while staying affordable will help it rise to the top.

To see what the Stonic had to offer, the Korea JoongAng Daily took it out for a test drive on Tuesday. On a 75-kilometer (47-mile) course running from western Seoul to Namyangju, Gyeonggi, the car was put through its paces in both congested urban areas and on emptier highways.

With an official fuel efficiency of 17 km/l (40 mpg), the Stonic was highly responsive to the driver’s commands. With its body only weighing 1,260 kilograms (2,778 pounds) - about 100 kg lighter than Hyundai Motor’s Kona - the car shot forward with only a light touch of the pedal. Breaking was equally responsive.

Without much noise and effort, the Stonic comfortably reached 80 km/h when driving in the city. But with its speed exceeding 100 km/h on the highway, the car started generating more noise than expected, with both the engine and the wind outside clearly audible. 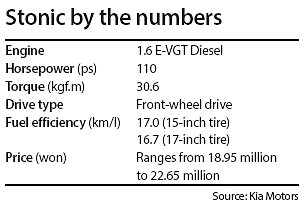 When accelerating further the noise picked up to the extent that it became difficult to hear the music, although conversing wasn’t a problem. This may be because the Stonic lacks the premium JBL speakers found in Hyundai’s Kona.

It was apparent that the car was performing above its ability. Climbing up a sloping road clearly showed its limits, with the diesel engine making a grumbling sound as the car stopped moving forward.

The test drive car was equipped with the highest trim - a 23 million won ($20,660) price tag - that included smart safety features in a package labeled Drive Wise and an advanced navigation system.

Compared to Hyundai’s Kona which is armed with smart features and systems, Kia’s latest offering is clearly a step behind.

The Stonic does not have a lane keeping system, so while the Kona autonomously steered the car to stay in lane, the Stonic is only able to sound an alarm if a wheel starts to stray over the line. The car also lacks a heads-up display on the front window that help drivers to focus on driving.

The interior was kept simple. The center console is equipped with the minimum number of physical buttons although their functions were fairly intuitive. The front seats are adjusted with more old fashioned physical metal handles, rather than the electronic controls that are more common today.

Despite these shortcomings, the Stonic aims to defy the critics with its affordability. Its price tag starts at 18.95 million won and goes up to 23 million won for the highest trim. Its official fuel efficiency is 17 km/l but the two-hour test drive session recorded a 21 km/h fuel efficiency.

The latest version of SsangYong Motor’s small SUV Tivoli and Kia affiliate Hyundai’s Kona both offer a 20 million won price tag for the lowest trim of their diesel models.

A total of 2,500 orders have been made since the Stonic launched last month, according to the company.

“This means an average of 125 cars have been sold per day, which far surpasses Kia Motors’ goal of selling 1,500 cars each month,” said Seo Bo-won, domestic marketing director at Kia Motors. “Considering that the car is only offered with a diesel engine, it is a laudable result,” he added.