Creativity thrives under oppression : Exhibit highlights the major cultural changes of the 1960s and ’70s

Creativity thrives under oppression : Exhibit highlights the major cultural changes of the 1960s and ’70s 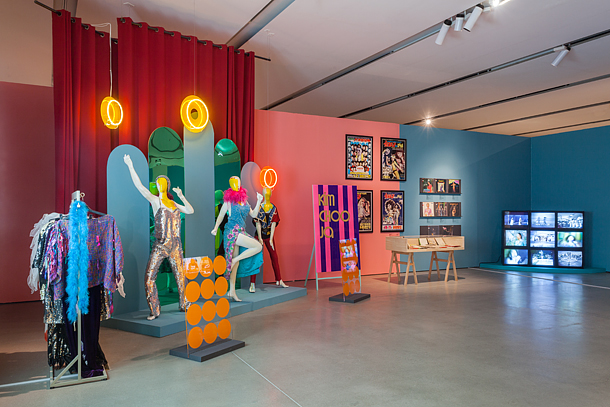 Singer Kim Choo-ja was one of the hottest divas in the 1960s and ‘70s. Her stage costumes, posters and old albums are on display at the “Asian Diva: The Muse and Monster” exhibit at the Buk Seoul Museum of Art in northern Seoul. [SEMA]

Kim Choo-ja was once the hottest diva in Korea. She made her stage debut in 1969, at the age of 19, when Korea was sending young men to fight in the Vietnam War (1964-73). She often wore miniskirts and was not shy to show her cleavage or shake her hips while singing.

For many Korean men of the time, Kim was the symbol of sexual desire and an exit from reality. Her songs like “Sergeant Kim from Vietnam,” and “Before Too Late,” were mega-hits, creating a new kind of popular culture in Korea.

But in 1975, then-President Park Chung Hee banned all of her songs, suggesting that her music could inspire political gatherings, and the one-time superstar slowly faded away from the collective memory.

Korea in the 1960s and ‘70s was a country marked by a sharp contrast between rapid economic development and turmoil. It was the era of military dictatorship and industrialization.

The atmosphere fostered a spirit of cultural resistance and youth movements really started to rev up. Similar phenomenons were also happening in other countries as the era was marked by the conflicting ideologies of the Cold War, the Vietnam War and anti-war protests.

It was also a time when emerging space technology seemed to promise a new beginning for humanity following the successful landing of the Apollo 11 on the moon.

At the “Asian Diva: The Muse and the Monster” exhibition currently being held at the Buk Seoul Museum of Art in Nowon District, northern Seoul, organizers have attempted to examine “how the political and cultural influences of the West were woven into the local context of postcolonial cultures in Korea and other countries in Southeast Asia.”

“More specifically, the exhibition focuses on the stigmatized subcultures of the period under the violence and repression of the military order as well as women and minorities, who were marginalized to the fringes of the strictly male-centered patriarchal society,” said Shin Eun-jin, curator of the exhibit.

As soon as visitors enter the exhibition hall, they walk into Kim’s dress room while her popular songs play in the background.

There’s also a black-and-white photograph of a young Korean woman taken from behind, walking down the streets of Myeong-dong in central Seoul wearing hot pants by late photographer Limb Eung-sik.

“We wanted to examine the postcolonial experiences in Korea as well as countries in Southeast Asia through the lens of pop culture, by exploring a wide range of issues centering on the realities of women, gender and sexuality,” said Shin.

“Through the exhibition, we would like visitors to hear the female voices that had been deserted, forgotten and unheard.”

Works by contemporary artists are also on display, including Kim Soyoung, Rho Jae Oon, Park Chan Kyoung, among many others. Indonesian artist Aramaiani’s installation of “Stitching the Wounds” (2006), in which the artist, together with Muslim women, stitched up silk fabric to express “Allah,” is also a part of the exhibit.

Works by late artist Chun Kyung-ja from her years as a military painter during the Vietnam War provide a look into the life of a solider at the time.

There’s also a wide range of cultural memorabilia including personal collections and recordings of Kim, which are being presented to the public for the first time.

The exhibition ends Oct. 9 and admission is free. For more information, visit semal.seoul.go.kr/bukseoul or call (02) 2124-5201. The museum is closed on Mondays.