Celebrating the whimsy of Chinese master Qi Baishi : Retrospective also features works done in homage by Sa Suk-won and others

Celebrating the whimsy of Chinese master Qi Baishi : Retrospective also features works done in homage by Sa Suk-won and others

One of the “Shrimp” ink paintings, for which Chinese art master Qi Baishi (1864-1957) is most famous for. The painting is part of Qi’s first-ever retrospective in Korea. [SEOUL ARTS CENTER]

The first-ever retrospective of the work of legendary Chinese art master Qi Baishi (1864-1957) in Korea started on Monday at the Seoul Calligraphy Art Museum in southern Seoul. Although cultural exchanges between the two countries have recently gone cold, amid Beijing’s continued boycott of Korean arts and culture in response to Seoul’s plan to install the U.S. Terminal High Altitude Area Defense (Thaad) antimissile system, the large-scale show has come together without a hitch.

The exhibition titled “Qi Baishi: From a Carpenter to a Master,” features 53 pieces of the artist’s ink and color paintings, calligraphy and seal carving art. The exhibit also includes 83 antique pieces that Qi collected over his lifetime. About 40 paintings, calligraphy and seal carving works by contemporary Korean and Chinese artists in homage to Qi are also on view in this exhibition.

“We had been worried but actually faced few problems and the exhibition now has opened safely,” Lee Dong-kook, chief curator of the museum, located in the Seoul Arts Center, told reporters on Monday. “Qi is a great artist not only of China but also of East Asia, and of the world. The power of art by such a maestro is important… [and even] more important when the political conditions are not very good.”

“Arts and culture should be independent from politics,” said Liu Gang, professor at Hunan Provincial Museum in China, which has loaned most of the Seoul exhibits. “I hope this exhibition will help boost cultural exchange between the two countries again.”

Qi is regarded as an important link between traditional East Asian ink paintings and the region’s modern art. Such qualities are illustrated in his paintings of shrimp, for which he is particularly famous. Two of Qi’s shrimp paintings are on view at the exhibit.

Qi’s painting “Grapes and a Squirrel” is part of “Qi Baishi: From a Carpenter to a Master” at the Seoul Calligraphy Art Museum in southern Seoul. [SEOUL ARTS CENTER]

“He draws the floating shrimp as if he was making strokes on the surface of water, instead of paper,” said Liu.

According to the website of the Metropolitan Museum of Art in New York, which has another shrimp painting by Qi, he was “free to explore the abstract expressive possibilities of structure, ink tone, and composition and to achieve the direct, childlike spontaneity and naturalness.”

“Qi didn’t draw while watching the shrimp,” said Korean contemporary artist Sa Suk-won. “He observed the shrimp and studied their form. Then, he would make brush strokes like in calligraphy, while seeing the shrimp with his mind’s eye.”

Sa, 57, one of the best-selling painters in the Korean art market, presents his oil paintings of a shrimp, a crab, a lotus flower and others in homage to Qi in this exhibition. They are juxtaposed with the Chinese master’s ink paintings of the same subjects. For the homage paintings, Sa used both brightly-colored oil paints, common in Western art, and brush strokes in calligraphic style, which is often seen in East Asian traditional art.

Sa said he has been a big fan of Qi since he saw a book of Qi’s paintings in a Chinese bookstore in Myeong-dong, central Seoul, when he was a high school student.

“I admire Qi’s ability to depict living and moving creatures and his care for them reflected in his works,” Sa said. “While the works by Chinese masters who influenced Qi, including Xu Wei [1521?93] and Bada Shanren [1626-1705], have a lonely and melancholic air, Qi’s works have cheerful and peaceful atmosphere… That fascinates and inspires me.” 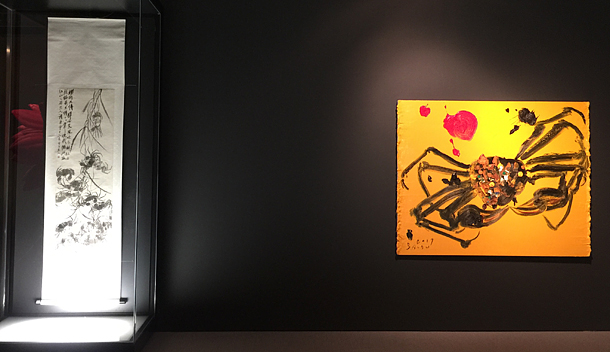