Understanding the appeal of a trip to North Korea : Visitors to the Hermit Kingdom travel for a variety of reasons

Understanding the appeal of a trip to North Korea : Visitors to the Hermit Kingdom travel for a variety of reasons 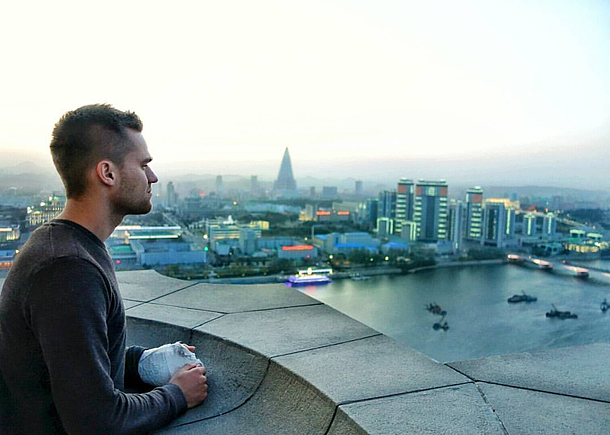 Jacob Laukaitis, a tourist from Lithuania, poses at the Juche Tower in central Pyongyang during his trip to North Korea last year. [JACOB LAUKAITIS]

Each year, thousands of tourists pay to travel to North Korea, drawn to the mysterious country despite it being governed by one of the harshest regimes on Earth. That number, however, is about to fall after the U.S. State Department’s announcement last month of a travel ban on U.S. citizens from traveling to the geopolitically isolated country. 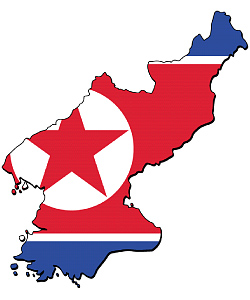 The travel ban, which will take effect in September, comes after the death of U.S. college student Otto Warmbier on June 19. The 22-year-old American traveled to Pyongyang on a trip organized by Young Pioneer Tours in December 2015 and was imprisoned for nearly 17 months for removing a propaganda poster from his hotel. After slipping into a vegetative state, he died on June 19, six days after he was released from imprisonment in the North.

From the South Korean perspective, one of the major motivations behind wanting to travel to the North is the desire to reunite with family members who were separated following the 1950-53 Korean War.

Only 18,800 Koreans have been given an opportunity to participate in the 19 rounds of face-to-face reunions since the first gatherings took place in 1985. About 60,000 South Koreans continue to wait for a chance to meet their long-lost spouses, siblings and parents across the border. 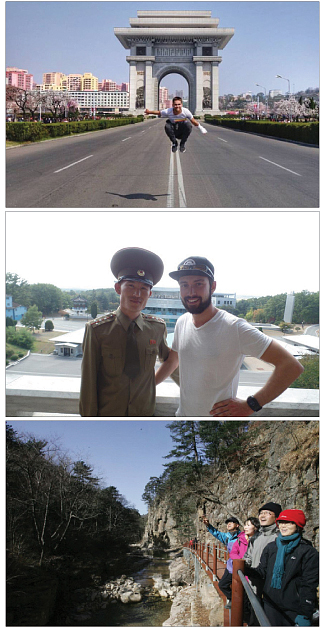 From top to bottom: Jacob Laukaitis from Lithuania poses while attending the annual Pyongyang marathon during his trip to the North last year; Henning Erdmann from Germany poses with a North Korean during his trip earlier this year; South Korean tourists admire at the view of Mount Kumgang during their trip in 2007. [JACOB LAUKAITIS, HENNING ERDMANN, JOONGANG ILBO]

For those outside of the Korean Peninsula, however, going to North Korea has always been a niche adventure for those looking for something off the beaten track. To them, a trip to the secretive state is like “watching a historic drama in the cinema,” said Henning Erdmann from Germany, who traveled to the North earlier this year.

“You are interested, you feel happy, you feel sad, you are surprised and in the end, you just leave the cinema, compare the movie with your situation and you finally feel happy with the life you are living at home,” he said.

Easy access to travel agencies that promise an adventure that is anything but typical with costs between $500 and $2,500 is another factor that draws foreign tourists. There are currently at least five travel agencies in the world that offer excursions to the North: the U.S.-based Uri Tours; Lupine Travel and Secret Compass, both based in Britain; and Koryo Tours and Young Pioneer Tours, both based in Beijing.

“There are lots of countries in the world people would rather go to instead of visiting North Korea,” Erdmann said. “But visiting North Korea makes you kind of special when you talk to other people. I was also attracted by the myth of North Korea. You don’t see many pictures on TV or on the internet about life there. That increases the desire to see it with your own eyes.”

He described traveling the North as “entering a different world.”

Some opt to go to the North to better understand the country’s history.

“One of the main reasons I wanted to visit North Korea was because I wanted to see what it’s like being in a socialist country so that I could understand a little bit more about the sort of society my parents were born and raised in,” said Jacob Laukaitis, from Lithuania, which used to be a part of the Soviet Union before 1991, about his trip last year.

That pioneer spirit and curiosity, however, sometimes lead to something totally unexpected, as evidenced by the case of Warmbier and the 15 other Americans that have been detained in the North over the past decade. There are three known U.S. citizens currently detained in the so-called Hermit Kingdom, all of whom are ethnic Koreans.

“I felt devastated [upon hearing about Warmbier],” said Laukaitis. “He was my age and he went to North Korea just a couple of months before me. A year later, he died. I, or any other tourist, could have easily been in his shoes for any minor reason. I don’t know any other country where this would have happened - for trying to take a poster.”

Despite the fear and risks, however, many are still opting to travel to North Korea to take a peek at the secretive and neurotic state.

Around 10,000 tourists, 5,000 of which are Westerners, annually visit North Korea, and the number has steadily risen over the years, according to Matt Kulesza, tour guide and media officer from Young Pioneer Tours, one of the largest international operators of trips to North Korea.

The number of tourists that the travel agency has taken to the Democratic People’s Republic of Korea hit a steady 1,000 per year in 2014 and 2015. The figure reached 1,500 last year, and Kulesza forecasts similar outlook for this year, despite the travel agency’s announcement a day after Warmbier’s death not to organize tours to North Korea for U.S. passport holders.

“Our most popular tourists come from Germany, the Netherlands, the U.K., Australia, Canada and other European countries,” said Kulesza, adding “I personally think Europeans show an interest in North Korea as it is one of the truly untouched destinations with no outside influence.”

From the South Korean perspective, tourists’ desire to travel to the North is often difficult to understand because the motivation behind their trips is unthinkable to most below the 38th parallel.

“The motivation and the methods of traveling to the North is very different for South Korean and Western tourists,” said Shin Yong-seok, a researcher at Korea Culture and Tourism Institute. “While South Koreans generally travel to the North out of feeling connected to the long-separated North Korea, curiosity to experience the reclusive country is what drives Westerners to visit the North.”

These differences are inevitable not only because of the different historical backgrounds, but also due to the different tour styles that the North offers.

“While South Korean tourists allowed to enter the North are limited to visiting Mount Kumgang, Western tourists are allowed to experience more diverse areas like Pyongyang and Sinuiju.” People from the West are also allowed to stay in the country for longer durations, according to Shin.

He further explained that the difference is derived from the North’s perception that South Korean visits are a form of “South-North business” important in furthering relations between the countries, while other foreign visitors are seen as an important source of funds for the isolated nation’s economy.

It was not long ago that many South Koreans also showed a deep interest in crossing the border, but their views completely changed following a tragic incident in 2008 that left a South Korean tourist dead.

But everything changed after July 2008, when a South Korean tourist in her 50s was fatally shot by a North Korean soldier, resulting in the program’s suspension.

“In addition to wanting to reunite war-torn families, there have been many South Koreans who wanted to visit the North to enjoy the beautiful scenery of Mount Kumgang,” said Yoon In-joo, a senior researcher at Marine Research Division, who in 2015 wrote a thesis titled “North Korea’s Tourism Industry in the Kim Jong-un Era: Evaluation and Prospects.”

As much controversy as the trip to the North entails, South Koreans’ interpretation of people traveling the North also greatly varies.

“It’s a matter of how you perceive the effectiveness of a trip. While some South Koreans believe travel to North Korea allows the country to maintain its current [political] system, others claim that indirect interaction could bring a positive change to the system,” Shin said.