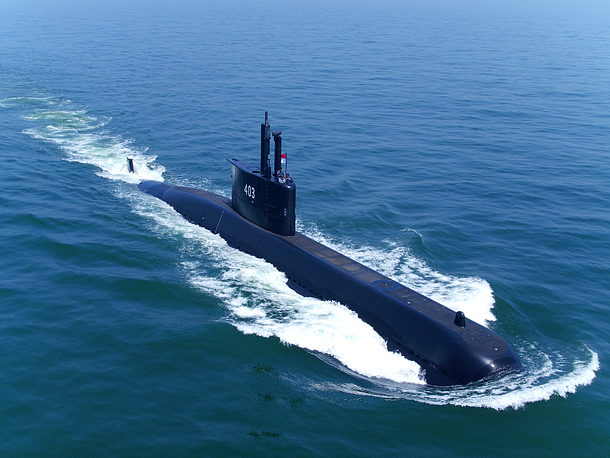 Daewoo Shipbuilding and Marine Engineering delivered its first navy submarine to the Indonesian government Wednesday. This is the first submarine exported by a Korean company.

The attack submarine was handed over to Indonesia’s Ministry of Defense at DSME’s shipyard in Geoje, South Gyeongsang. Named Nagapasa after a weapon in Hindu mythology, it is one of three navy submarines from a deal DSME made with the Indonesian government in 2011. The deal is worth $1.1 billion, equivalent to exporting around 73,000 sedans from domestic brands.

The Nagapasa is an upgrade of the Chang Bogo-class submarines that Korea originally acquired from Germany in 1988. The achievement is notable not only for the company, but also for Korea, which became the fifth submarine-exporting country in the world, following England, France, Russia and Germany. Korea is the first country to export submarines that did not develop the technology independently.

Indonesian President Joko Widodo also expressed interest in the DSME submarine deal and visited the shipyard in person during his stay in Korea for the Asean-Republic of Korea Commemorative Summit in 2014.

The completion of the first attack submarine is significant for DSME in that it has now manufactured a full line-up of naval vessels, from combat support ships to frigates and training ships. Apart from supplying the Korean navy, DSME has also exported 14 defense ships to Bangladesh, Malaysia, the United Kingdom, Norway and Thailand since 1998.

“The delivery is a monumental event in proving DSME’s competitiveness for submarine development,” said DSME CEO Jung Sung-leep. “We hope our technology can contribute to the Korean navy as well as continuing partnerships with the Indonesian navy.”