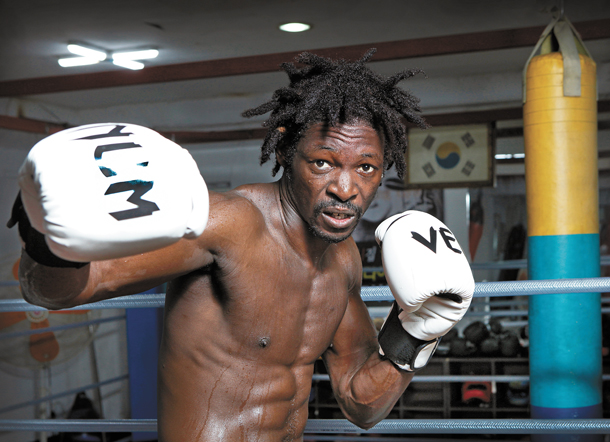 The fighters touched gloves and the defender, Lee Gyu-won, immediately hammered his opponent with a power jab, a hook and a flurry of body shots. But the challenger, a Cameroonian refugee named Abdoulaye Assan, who fights under the Korean name Lee Heuk-san, took the hits and kept moving, pawing at his opponent with jabs. 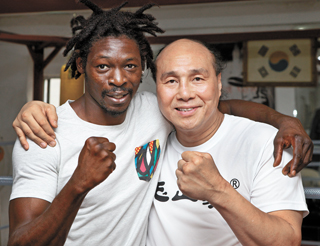 Abdoulaye Assan poses for a picture with Lee Kyung-hoon, his manager and boxing coach. [PARK SANG-MOON]

Every time a new round began, Assan, a southpaw, closed the gap with a roaring left straight that didn’t always connect, but devastated when it did. By the second half of the fight, Lee was clinching so much it looked like a wrestling match.

At one point, Assan merely moved at Lee and Lee stumbled back to get away and fell into the ropes. Another time, Assan’s left straight landed so hard Lee stood for a few seconds looking around at the floor as if he’d dropped something. 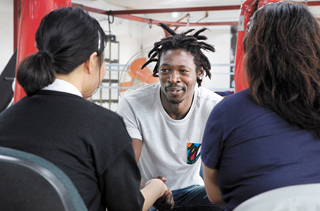 Assan meets a mother and daughter to whom he pledged to donate half his fight purse. [PARK SANG-MOON]

What had begun with a bang ended with a whimper. The Boxing M Korean Champion super-welterweight title, held on May 27, finished with a 3-0 decision in Assan’s favor. But according to Assan’s coach, Lee Kyung-hoon, this wasn’t just a title match - it was a chance to help him get his refugee status approved.

“For Assan,” he says, “this was literally a matter of life and death.”

Assan was born in the tropical city of Yaounde, the capital of Cameroon. His father passed away when he was young, his mother left for the neighboring country of Gabon early on, he doesn’t remember meeting his siblings and he left school while still a child. The only constants in his life were his grandmother, who raised him, and physical activity. Assan gave his heart to both.

As a child, he developed strong legs by playing football, running the field day in and day out, and later took up kickboxing.

“A kickboxing coach I knew just told me one day that I should play in tournaments,” Assan says. “I prefer kickboxing because I can use my legs.”

Cameroon has one of the lowest per capita GDPs in the world, and without a proper education or wealthy family background, Assan had few paths to success. So in 2004, when he heard the Cameroonian military was looking for boxers, he signed up. He was 21 at the time.

Transitioning from amateur kickboxer to military boxer wasn’t easy. For one thing, kickboxers use a stance that puts more weight on the front foot for better defense but makes it harder to constantly stick and move. The average kickboxer just doesn’t float like a butterfly. But Assan was tenacious, and during a local boxing tournament, he caught the eye of a military scout.

But what seemed like his big break turned out to be a poisoned chalice and, Assan says, the worst experience of his life.

He spent 10 years in the General Assembly of the Armed Forces and Police, which he says is divided into two groups: those from wealthy, educated backgrounds and everyone else. Assan was in the latter group. Having surrendered his freedom to escape the limits of his class and support his grandmother, Assan found he had only gone from bad to worse.

Once he was tapped to be a military fighter, he was entered into tournament after tournament. Though his bouts earned handsome fees, the military executive who managed the fights took Assan’s earnings. As a soldier, he couldn’t enter regular tournaments either. Once, he asked for permission to fight in a local championship, but was told “no.”

Out of desperation, he competed anyway and when word got back to his superiors, he was jailed for two months and routinely beaten by the guards.

To make money, he sold clothes at the local marketplace when he wasn’t training or fighting.

“They once told me to lose 10 kilograms [22 pounds] because they wanted me to go from the welterweight division to featherweight,” Assan says, “and when I asked why, they said ‘just because.’”

If Assan failed to make weight, the army wouldn’t give him food or water and instead ordered him to run ten kilometers (6.2 miles) while carrying a 25 kilogram pack. To toughen him up, they also gave him regular beatings.

Assan dreamed of running away - from the military, from his homeland, from everything.

Since winning the Korean Champion title, he has been featured on the Korean reality show “My Neighbor, Charles,” and has had multiple interviews. These days, fans send him words of encouragement through Facebook messages and in person.

But despite his fame, boxing in Korea is no longer a popular sport, and so Assan still struggles financially since it’s difficult to regularly schedule matches. His coach and manager, Lee, hopes to train Assan to becoming the welterweight champion of Asia.

“Once he wins the Asian title, he’ll be globally ranked,” Lee says. “But to do that, he needs a sponsor so we can invite the Asian champ to fight Assan here in Korea.”

In 2015, Assan was told he would be going to Korea to compete at the 6th CISM World Games, also known as the Military World Games. Before the team left Cameroon, military officials fed the fighters anti-Korea propaganda to discourage any of them from running away.

“They told us Korea was a horrible place,” Assan says, “but for me, it was impossible for any country to be worse than Cameroon.”

Assan says things were so bad that even if the event had been in North Korea, he would have run away and settled there.

When he heard the championship would be in Mungyeong, North Gyeongsang, Assan reached out to a Canadian woman who was running a Korean boxing page on Facebook. She was of little help, however, and when the tournament began on Oct. 2, he still had no idea how he was going to make his break.

Then one day, towards the end of the event, his fellow soldiers went for a walk and Assan and another fighter, Etobil Jean Durandal, saw their chance. They grabbed a taxi to a nearby bus terminal and took a bus to Seoul.

“I didn’t have enough money,” Assan says, “but I was with my friend Etobil. We split the money for the motel, for food.”

On Oct. 16, Assan and Durandal visited the immigration office to apply for refugee status. They were granted six-month temporary visas. Not knowing what to do next, Assan contacted the Canadian woman from Facebook.

“She was really surprised when I told her I was in Korea,” Assan says. “Nothing was planned. I just contacted her.”

Luckily, she was able to help him and Durandal find accommodation and took them to a gym in Cheonan, South Chungcheong, where they could continue boxing.

A month after Assan filed his refugee application, he received a letter from Seoul Immigration office telling him he had been rejected because, the letter said, the government decided he did not have a “well-founded fear of being persecuted.”

Assan appealed to the minister of justice.

“I want to come to your boxing club,” Assan texted Lee in Korean.

Assan wrote back in English, “I would boxed in your club with my friend.”

“I saw Assan and Etobil when the coach at his former gym brought them to our gym for a sparring match,” Lee says.

Assan sparred with one of Lee’s fighters and immediately knew he wanted to continue training under Lee. But Lee was hesitant, since Assan’s visa status was uncertain. In the end, however, Lee took Assan on because of Assan’s impeccable physique. At 1.8 meters (5 feet 11 inches) and 66 kilograms, Assan embodies what Lee considers to be the perfect boxer’s build.

Floyd Mayweather, the best pound-for-pound fighter in the history of the sport, is 1.73 meters and weighs 68 kilograms. Also, at his height, Assan has a reach of 1.87 meters. Compare that to other world champions in his weight class, like Keith Thurman at 1.75 meters or Miguel Cotto at 1.7 meters.

“If Assan was given proper training when he first started, just based on his physique,” Lee says, “he could’ve been a world-class fighter.”

But Assan is working hard to make up for lost time, training five days a week.

“Compared to the training I had in Cameroon,” Assan says, “the system in Korea is a lot more structured and it gives me more freedom, too.”

On the weekends, he travels to Seoul with friends. One of the constant challenges he faces is maintaining his weight, since Assan is a devout Muslim who doesn’t eat pork and, he says, a very picky eater as well. These days, to earn spare cash, he helps Lee teach boxing to gym members and had a part-time job picking tomatoes. And as a symbol of his new life, he grew out his hair, since the military required that he keep his hair shaved.

But aspects of his past still haunt him. Not a day goes by that he doesn’t think of the family he left behind, particularly his grandmother, who has since lost her vision and whom he hears about through his aunt, or his daughter, who died last year from an incurable disease.

Then there’s his friend, Durandal, who was arrested after his visa expired in 2016 and who now lives at a shelter, awaiting deportation to Cameroon.

“I’m still curious how his visa expired while mine didn’t,” Assan says.

Assan visits Durandal whenever possible, but the visits are always hard, as he knows the punishment that likely awaits Durandal once back in Cameroon.

“A Cameroonian friend of mine once ran away to Nigeria but was caught and arrested,” Assan says. “I later found out he was executed.”

Boxing was huge in Korea in the 1970s, when Kim Ki-su won the world boxing championship to become the first Korean boxer to win a global title. But as funding dried up over the years and Korea no longer placed fighters among the world’s best, popularity waned.

“Even in Japan, quite a number of the boxers are ranked globally,” Lee says. “But there aren’t any Korean boxers ranked top ten in the world.”

Assan wants to change that, but there’s a wrinkle - there are no Korean boxers in the welter-weight division who can compete at his level, which makes it harder for him to improve.

His next match, and first match as a permanent Korean resident, will be defending the Korean Champion super-welter-weight title tomorrow at a parking lot in a local restaurant in Chuncheon, Gangwon.

The match will be co-hosted by a non-profit child fund organization, and part of the fight money will be donated to a local mother and daughter, who are both suffering from an incurable disease.

When Assan heard their story, he decided to donate half his fight purse of 600,000 won.

A lifelong underdog, Assan has finally fought his way to the top with his own two hands. His refugee application was finally accepted on July 18 and he can now compete in international events as a refugee and is eligible for health insurance benefits.

“I finally feel free,” he says, “because I have a home in Korea.”