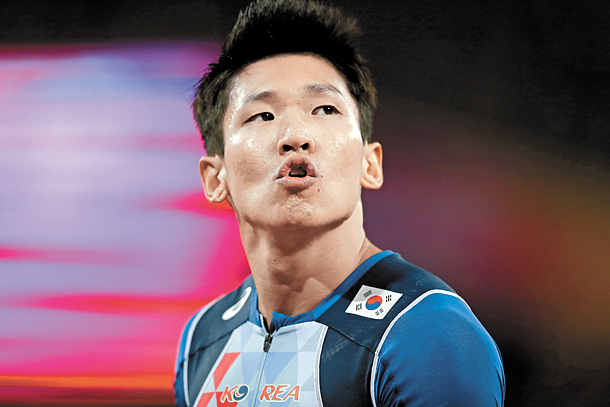 Kim Kuk-young after competing in the semifinals of the men’s 100-meter sprint at the 2017 IAAF Wolrd Athletics Championship at London Stadium on Saturday. [AP/YONHAP]

Though Kim Kuk-young wasn’t able to advance to the final at the 2017 International Association of Athletics Federations (IAAF) World Championship in London on Saturday, he made history in the Korean men’s 100-meter sprint, becoming the first Korean sprinter to advance to the semifinals at an international event.

Kim finished third in the men’s 100-meter qualifying race with a time of 10.24 seconds to advance to the semifinals on Friday. Kim’s advancement to the semifinals is the farthest any Korean athlete has progressed in the men’s 100-meter sprint at an international competition. But rather than being happy about the accomplishment, Kim showed disappointment in his performance in the finals. 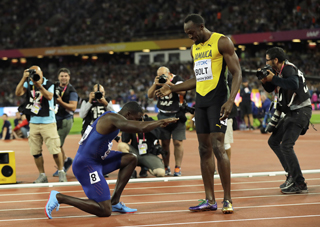 Justin Gatlin of the United States congratulates Usain Bolt of Jamaica after the men’s 100-meter sprint final at the 2017 IAAF World Championships on Saturday. [AP/YONHAP]

Kim’s 10.40 time in the semifinals was a lot slower than his 10.07 performance at the Korea Open in June. The top two finishers of Kim’s semifinal, Akani Simbine of South Africa and Justin Gatlin of the United States, ran 10.05 and 10.09, respectively. While there is no such thing as “if” in sports, if Kim had ran the time he ran at the Korea Open, he would have advanced to the final.

But Kim wasn’t completely depressed about the result; instead he saw it as a good motivator for the rest of the season.

“I competed against others until the 50 meter mark so next time, I’ll try to be in the lead until the 80-meter mark,” Kim said. “I’ll try harder to have a better result.”

Since he was 19, Kim has been setting the record in the Korean 100-meter sprint, which was previously held for 31 years by Seo Mal-goo. Seo ran the record 10.23 race at the 1979 Summer Universiade in Mexico.

Kim trains with the belief that he is the only sprinter in Korea who can improve on that record. Now Kim has his eyes set on the Asian Games next year.

“I really want to break the 10 second mark at the Asian Games in Jakarta next year,” Kim.

To do so, Kim will be training to set more Korean records over the next year and plans to compete in the IAAF Diamond League and World Challenge next season in preparation for the 2018 Asian Games in Jakarta.

“My start is killing me,” Bolt was quoted on saying on ESPN.com. “Normally it gets better during the rounds but it didn’t come together.”