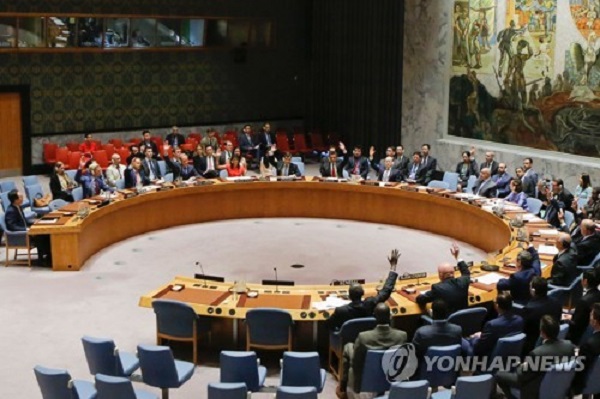 The sanctions provided in Resolution 2371 aim to slash North Korea's annual export revenue of US$3 billion by a third. They include a ban on all exports of coal, iron, iron ore, lead, lead ore and seafood.

But restrictions on supplies of oil to North Korea were excluded, apparently due to China and Russia's concerns they could deepen the humanitarian crisis in the cash-strapped nation.

"This resolution is the single largest economic sanctions package ever leveled against the North Korean regime," she said. "This is the most stringent set of sanctions on any country in a generation."

Negotiations for the new resolution began after Pyongyang conducted its first test of an ICBM on July 4. Following its second test on July 28, the U.S. reached a deal on the sanctions with China, the North's top trading partner and ally.

Consent from China and Russia is crucial as they are two of the five permanent veto-wielding members of the council.

Haley thanked the Chinese delegation in particular for the "important contributions" they made to the resolution. She noted, however, that the international community must come together to further increase pressure on Pyongyang.

"We must work together to fully implement the sanctions we imposed today and those imposed in past resolutions," she said. "The step we take together today is important. But we must not fool ourselves into thinking we have solved the problem. Not even close."

The latest resolution is the eighth adopted by the Security Council since 2006 in response to North Korea's five nuclear tests and long-range missile launches. In the previous resolutions against Pyongyang adopted last year, the council set export caps on coal, the country's main trade item. But critics say tightened sanctions have done little to stop North Korea's missile and nuclear development.

"The North Korean threat has not left us. It is rapidly growing more dangerous," Haley said. "Further action is required."

The U.S. will continue to take "prudent defensive measures" to protect itself and its allies, she said.

South Korean Ambassador to the U.N. Cho Tae-yul welcomed the resolution, saying Pyongyang must bear the consequences of its flagrant violations of existing resolutions.

He added that while the recalcitrant state seems to be under the delusion that its nuclear and missile programs will ensure its security, they will only serve to strengthen the resolve of the international community.

Chinese Ambassador Liu Jieyi said the resolution does not intend to harm the North Korean people. But he urged Pyongyang to cease activities that might further escalate tensions.

He also called for halting the deployment of the THAAD missile defense system in South Korea, saying it will not resolve the North Korean nuclear stalemate. Beijing views the U.S. missile shield as a threat to its own security.

Russian Ambassador Vasily Nebenzia said sanctions are not an end in themselves but a means to engage Pyongyang in constructive talks.