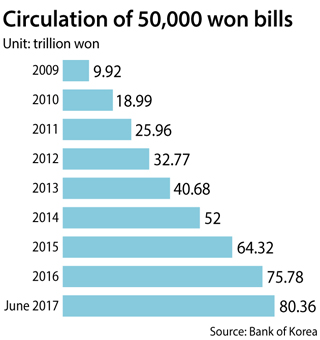 For the first time, the 50,000 won ($44.33) notes in circulation exceed 80 trillion won as more people make use of the nation’s largest bill, which were once associated with corruption and shady dealings.

According to the Bank of Korea on Monday, in the first half of this year 4.59 trillion won worth of 50,000-won notes were issued, a 6.1 percent increase compared to a year earlier.

As a result, 50,000-won notes in circulation at the end of June were worth 80.36 trillion won, the highest number since the bill was introduced in June 2009.

The central bank on average has been issuing 10 trillion won in 50,000-won notes every year.

The notes now account for 79.3 percent of the 101.37 trillion won of currency in circulation in terms of value.

“Households and businesses stockpile 50,000-won notes because of its convenience,” said a BOK official.

But there are still concerns that the 50,000-won note is used for illegal purposes such as money laundering and tax evasion.

A memorable news story about the note involved 11 billion won worth of 50,000-won notes found buried in a garlic field in 2011, the proceeds of an illegal gambling websites. The money was hidden to avoid a police investigation and a tax bill.

The note was nicknamed the “garlic field banknote.”

The 50,000-won is also alleged to be popular among bribe payers and takers because it takes up so much less space than smaller bills.

In December, the police found 40 million won in 50,000-won bills hidden in the kitchen ceiling of a lawmaker who was involved in a bribery case related to a construction project in Busan.

That’s proven by the so-called recovery rate, which has gone from 49.8 percent last year to 61.8 percent currently. In other words, six out of every 10 of the notes find their way back to the banks instead of being stacked up in some corrupt politician or drug dealer’s closet.

Other countries are also worried about the illegal charms of big bank notes.

In May 2016, the European Central Bank announced that it will no longer print 500-euro notes and last November the Indian government demonetized 500 rupee and 1,000 rupee notes to cut down on corruption.