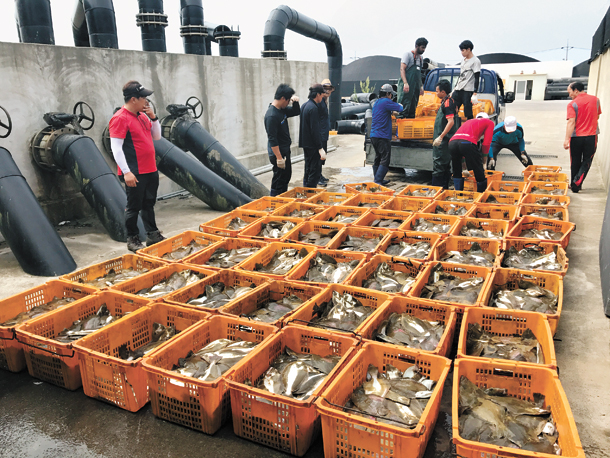 Fishermen haul up dead fish from the farms in Jeju, where a total of 231,000 flatfish in nine fish farms perished as of Monday due to rising water temperatures. [CHOI CHOONG-IL]

“Fish being cultivated in farms can die if the water temperature rises even one degree,” said Oh Tae-gi, an official of the Oceans Ministry. “The fish float some five to seven days after they die, so nearby fish farms are also likely to be affected.”

Flatfish need the water temperature to be 24 degrees Celsius or lower and starry flounder needs the water to be between 13 and 18 degrees Celsius. Many of the fish farms on land are operated by drawing seawater directly into the farms.

“The water temperature rose earlier in this season than it did last year, and we expect it to stay that way for a while,” said Han In-sung, researcher at the National Institute of Fisheries Science. “Because we expect the temperatures on land to hit at least 30 degrees Celsius for a while and there are no signs of a typhoon coming any time soon, the fisheries will have to brace for the worst.”

Some farm owners have hurriedly installed shades and liquefied oxygen tanks at the farms.

“Rockfish will die out in Cheonsu Bay if the water temperature stays above 28 degrees Celsius for more than a week,” said Lim Min-ho, director of the fisheries support department of the South Chungcheong provincial government. “In addition to the local governments’ assistance, the fishermen themselves need to take action and cooperate for the best results.”