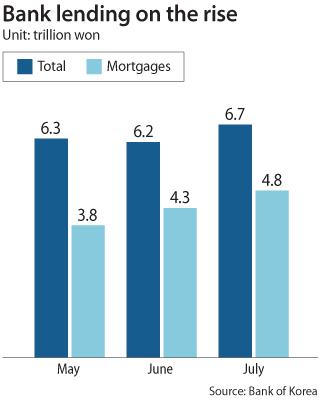 On a recent visit to the bank, Mrs. Kim, 40, and her husband consulted with a teller on whether they should pay back some of the principal on their mortgage or use their money to invest in other financial products.

In general, the advisable decision would be to repay debts first, but the couple figured that interest rates were so low right now, they could still afford the monthly payments even after investing some of their money.

The teller, though, advised them to focus on paying back their loan now because the central bank is likely to start raising interest rates soon.

The tightening mood is already showing in the bond market, where Korean government bonds are selling like hotcakes. Yields for three-year bonds closed on Tuesday 0.03 percentage points higher at 1.81 percent. Not only was this the biggest daily increase so far this year, the rate was also a nine-month record.

The rates suggest that the bond market is already speculating about an interest rate hike from the Bank of Korea as early as this month, when the monetary policy committee will hold its next meeting.

The market response came after President Moon Jae-in’s chief economic policy adviser, Kim Hyun-chul, said in an interview with local media outlet Edaily that he believes the current rate of 1.25 percent is too low. The benchmark rate has remained at a historic low since June 2016, when the central bank unexpectedly shaved off 0.25 percentage points from the rate, calling it a pre-emptive move to keep the economy from declining.

Korea’s household debt, including credit card purchases, is currently at an all-time high of 1,359.7 trillion won ($1.2 trillion), and it’s expected to further increase.

The Bank of Korea on Tuesday released a report showing that loans taken out at banks in July grew at its fastest month-on-month rate this year despite the government’s efforts to curb borrowing through stricter lending rules.

In July alone, 6.7 trillion won in new loans were taken out at from banks, about 500 billion won more than in June. It was also an increase of 400 billion won from a year ago.

As a result, the balance on bank loans as of the end of last month amounted to 737.7 trillion won.

Not only was it the biggest monthly increase so far this year, it was also the sharpest increase in eight months. In November 2016, 8.8 trillion won worth of new loans were taken out from banks.

The Bank of Korea noted that mortgages were the primary contributor to the increase in fresh loans. New mortgages totaled 4.8 trillion in July, bringing the balance to 554.6 trillion won. That’s 500 billion won more than June’s 4.3 trillion won of fresh loans.

The comments from Moon’s economic policy adviser were interpreted by the market as the administration pressuring the central bank to raise interest rates again as part of its grander campaign to cool the real estate market.

His remarks come on the heels of the government’s latest effort to tighten lending rules. The measures included higher taxes for homeowners with multiple apartments and designated certain areas as “hot,” subjecting them to stricter loan standards. They are considered to be the most intense since the last liberal government under President Roh Moo-hyun a decade ago.

Advisers of Moon, who himself had served as chief of staff under Roh, have repeatedly said his government would take additional steps as needed to check runaway buying in the real estate market. The National Tax Service on Tuesday said it was specifically looking into 286 people suspected of evading property taxes.

The tax collection agency said one of the suspects owned three apartments last year despite having no specific income. Then this year, the same suspect, who is 20 years old, managed to purchase a 1 billion won apartment in the pricey neighborhood of Banpo-dong, southern Seoul.

But even before the policy adviser’s comments, the market was already adjusting for an earlier-than-expected rate hike given the government’s campaign against the real estate market.

After the government released stricter real estate measures earlier this month, investors moved their forecast for a rate increase up to October, from a previous projection of next year’s first half.

The central bank has three more monetary policy committee meetings left this year - this month, October and November - and all signs seem to point toward tightening.

During the Bank of Korea’s 67th anniversary celebration in June, the bank’s governor, Lee Ju-yeol, hinted that the committee would adjust its monetary policy when the economy shows clear signs of improvement, and if the country’s recent rosy export numbers are to be considered, it may be the case.

“While it still has to be seen how much property buying will shrink since the [government’s most recent real estate] measures were announced, household debt will likely see deceleration in growth with banks strengthening their risk management of household debt,” said Jeon Bae-seung, an eBest Investment Securities analyst.

Some analysts have expressed concern that the government’s attempt to curb household debt and the real estate market by raising the interest rate could have the side effect of slowing the economy’s recovery, an issue that the state-run Korea Development Institute raised in a recent report.