Smokers get another e-cigarette option: glo

Smokers get another e-cigarette option: glo 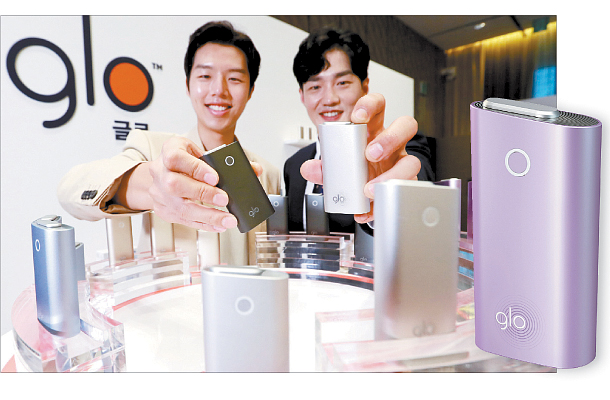 Models hold up British American Tobacco’s electronic cigarette glo at the Four Seasons Hotel in central Seoul on Thursday. Glo’s competition is Philip Morris’ IQOS, which has sold well in Korea since launching in May. [YONHAP]

British American Tobacco will begin sales of its electronic cigarette glo at its main store on Garosu-gil in southern Seoul on Sunday, putting it in direct competition with Philip Morris’ IQOS released earlier in May.

Devices like glo and IQOS are known as heat-not-burn cigarettes because they heat tobacco leaves to a level at which nicotine can still be extracted without burning them like conventional cigarettes. The process produces no ash, tar or smoke. What the user ends up inhaling is nicotine-infused vapor.

British American Tobacco added that its lab results showed glo had a significantly lower effect on indoor air quality and emitted over 90 percent fewer toxicants than cigarettes that produce 9 milligrams of tar.

The tobacco company, the largest in the world, first introduced glo in Sendai, Japan, in December. The product quickly increased its market share there to an estimated 8 percent in the first six months. Korea is one of the first markets where British American Tobacco has launched glo, following Japan and Canada.

“Korea’s a very important market within the group and one of our key markets,” said Hamish Norrie, the marketing director in Korea. “We also know that in Korea, a lot of consumers are seeking new experiences and new ways to do things.”

In June, British American Tobacco completed two manufacturing lines to produce Neostiks, the tobacco-filled sticks that work with glo, at its Sacheon factory in South Gyeongsang. The sticks will be sold in three varieties for 4,300 won ($3.80) per 20 sticks, similar to its competitor Heets sticks that go in Philip Morris’ IQOS.

IQOS launched in the Korean market in mid-May. Philip Morris has yet to disclose any sales figures from the Korean market, but the product’s initial success was demonstrated at several CU convenience stores, where IQOS sold out in the first few days of sale. The rush boosted the share price of CU’s parent company, BGF Retail.

IQOS and glo offer slightly different features and user experiences. The IQOS kit includes a charger and stick-shaped heater in which the Heets stick is inserted. After finishing a stick, the user has to recharge the heater in a separate charger for around four minutes before taking the next cigarette.

Glo, on the other hand, has combined the charger and heater in one device. For smokers who enjoy more than two rounds of cigarettes at one time, glo may be the better choice. Glo will retail for 90,000 won, 30,000 won cheaper than IQOS. They’re all be available at two stores, on Garosu-gil in southern Seoul and near Hongik University in western Seoul.