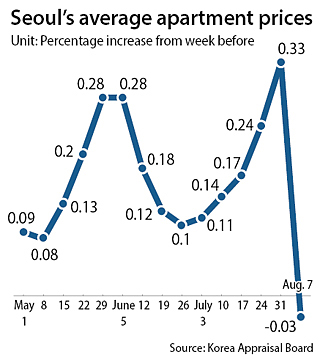 Recently an 84 square-meter (904-square-foot) apartment in Banpo-dong, Seocho District in southern Seoul, was offered for sale for 2.5 billion won ($2.2 million) - a 300 million won discount, or 10.7 percent, from what it was believed to be worth a week earlier.

Similarly, a 76 square-meter apartment in Jamsil, southern Seoul, was put up for sale for 1.45 billion won, a drop of 1.58 million won or 8.2 percent from a week earlier.

Both of these apartments are in complexes that could soon be redeveloped, making them among the hottest properties in the Seoul region.

Since the Moon Jae-in government on Aug. 2 announced measures to cool down the property market - the toughest such measures seen since the last liberal government 10 years ago - apartments awaiting redevelopment have seen prices fall for the first time in seven months.

According to the real estate information provider Budongsan 114 on Friday, the values of apartments subject to redevelopment fell 0.25 percent this week compared to a week earlier. The last time such apartments saw a drop was in the second week in January, when values dipped 0.08 percent.

Moon’s administration wants to ban current owners of apartments in such complexes from selling their properties. Sales of apartments to be redeveloped were one of the driving forces behind the continuing rise in apartment prices.

Redevelopment projects in the Gangnam districts have been the most sought after. But the softening of the market goes across the board.

According to a report by the Korea Appraisal Board released on Thursday, Seoul apartment prices in general fell for the first time in 17 months.

The drop was led by the four popular districts south of the river - Gangnam, Seocho, Songpa and Gangdong.

Seocho and Gangdong saw the biggest drop compared to the previous week.

Seocho apartment prices fell 0.22 percent, which is a significant turnaround from a 0.24 percent increase enjoyed the previous week - before the government announced the measures. Gangdong saw apartment values decline 0.2 percent compared to a 0.58 percent increase in the first week of this month.

The Ministry of Land, Infrastructure and Transport report showed that apartment transactions has come to a screeching halt after the Aug. 2 measures were announced.

The situation in Seoul was the same as only 113 apartments were sold after the announcement was made, a sharp drop from 1,124 the previous week.

In some other areas such as Sejong, which has been labeled by the government as an excessively speculative neighborhood - and hit with new limits on mortgages and higher taxes on apartment sales - some buyers walked away from apartments they were planning to buy.

“Since the Aug. 2 measures was announced, inquiries on apartments in Bundang has risen,” said a realtor in Bundang. “It seems investors in Gangnam are slowly making a move.”

Starting next month the government will be adopting a ceiling on preconstruction sales of apartments on private land.

Starting next year, home owners will have to pay a 50 percent tax on profits made on the redevelopment of their units when the value of the apartment rises 30 million won or more.

The ruling party is also looking into the possibility of raising the property tax.

“The impact of the government measures will likely be visible by the end of this year when homeowners starts to put up apartments for sale as the government has given an April deadline for people who owns multiple residences to either sell the apartment or register themselves as a real estate leasing business,” said Ham Young-jin, head of the Budongsan 114 research center.