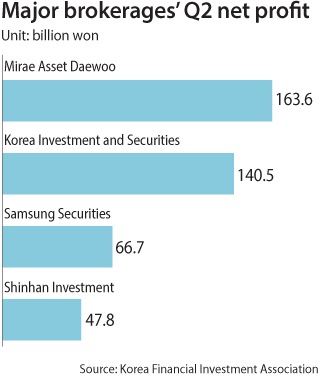 The brokerage giant regained its standing as the top profit earner between April and June after it was overtaken by Korea Investment and Securities in the previous quarter.

The main driver was hefty profit from the company’s investment banking unit as the segment made 87.7 billion won, up 130 percent from the previous quarter.

Mirae Asset Daewoo has led multiple deals in the second quarter, including financing the acquisition of water purification company Coway and listing Samyang Optics, a local lens manufacturer, and ING Life Insurance on the Kospi.

A source at Mirae Asset Daewoo credited the company’s efforts to diversify revenue streams after Mirae Asset Securities acquired Daewoo Securities. “We created synergy from the merger in diverse business areas, resulting in a more stable revenue structure. We will keep expanding our global network and focus on efforts to combine IT and finance.”

To strengthen its digital finance services, Mirae Asset Daewoo signed a partnership with internet company Naver to develop tech-driven financial services through the transfer of treasury shares in June.

Korea Investment and Securities, which ranks fifth in capital, kept its momentum by raking in 140.5 billion won in net profit. The result came short of maintaining the top post, but represents a 94.4 percent increase from the same period last year.

In the first quarter, Korea Investment and Securities saw a record-high net profit of 130.1 billion won, more than double what it made during the same period last year.

Its operating profit in the second quarter soared more than threefold to reach 189.7 billion won, while revenue came out to 1.36 trillion won, up 18.8 percent.

Analysts see the result as linked to the company’s early strategy to focus on more lucrative businesses like investment banking and asset management. The company raised its capital size to 4 trillion won last November to make itself qualified to provide a wider range of investment banking businesses and filed an application earlier this month for the license.