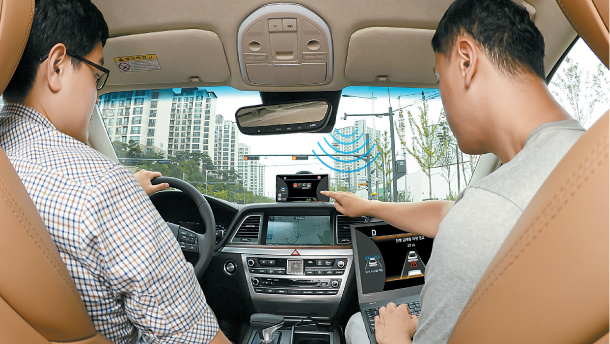 Hyundai Motor Group said Tuesday that it has equipped a 14-kilometer (8.7-mile) stretch of road in Hwaseong, Gyeonggi, with communications technology that will allow cars to “talk” to each other and automatically respond to obstacles in their environment.

The test route is part of the automaker’s initiative to develop self-driving cars. The technology, called vehicle-to-everything or V2X, is considered essential for vehicles to operate safely by themselves. It allows a car to receive data about nearby objects like other vehicles, buildings and pedestrians, all information that might be missed by sensors and cameras within the car itself.

“Operating a driverless car with only sensors is dangerous under bad weather conditions like heavy snow or fog,” a company spokesperson said. “V2X technology is necessary to ensure a safe driverless car.”

Hyundai Motor Group, which comprises Korea’s two largest automakers, Hyundai Motor and Kia Motors, hopes to commercialize V2X technology by 2020 and have it run on a 5G cellular network, which promises a higher capacity than existing networks to transfer large volumes of data faster.

The automakers will test their V2X system on 50 vehicles, five of which will be used by the city government for business purposes. The route will run from the auto group’s Namyang Research and Development Center to the Bibong Interchange. Base stations for communication with cars and CCTV cameras will be placed on seven crosswalks in between.

The devices will make vehicles aware of each other as they approach crosswalks and send alerts if there is a risk of collision.

They will also let cars know when pedestrians are crossing the street, when they are about to pass a construction zone and when another car is likely to violate a traffic signal based on its current speed.

Hyundai Motor Group said it would use a type of network architecture called wireless access in vehicular environments, which allows cars to send and receive signals stably even at high speeds.

The auto group’s ambition to commercialize V2X technology by 2020 is in line with the government’s plan to install the necessary infrastructure for it on highways by the same year.