Internet cafes up in arms over new StarCraft fees

Internet cafes up in arms over new StarCraft fees

Blizzard Entertainment made StarCraft: Remastered, a facelift of its popular StarCraft video game, available for wide release early on Tuesday, but the much-anticipated launch was marred by complaints from owners of Korean internet cafes who accused the game publisher of breaching local antitrust laws.

Internet cafes say they are being charged unfair fees to provide the latest version of StarCraft to customers.

StarCraft is a real-time strategy game that hit the market in 1997, just as the country was enduring a foreign exchange crisis. The game became popular immediately after its launch.

About 10 million copies of StarCraft have been sold globally since, and nearly half - about 4.5 million - have been sold in Korea, a testament to its massive popularity here. 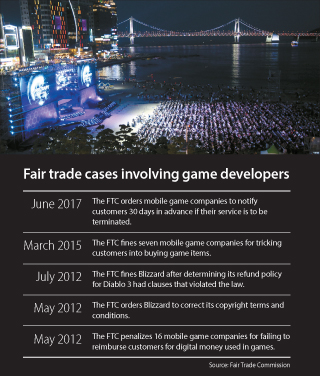 Blizzard hosts a promotional event for StarCraft: Remastered on July 30 at Gwangalli Beach in Busan. While the game officially launched on Tuesday, the company released the game early to select internet cafes in Korea as part of a promotional effort. [YONHAP]

With StarCraft’s Korean fandom in mind, Blizzard last month released StarCraft: Remastered exclusively for local gamers to try at select internet cafes as part of a promotional effort. But the partnership has faced a major bump in the past couple of weeks, with internet cafe owners filing a petition with the Fair Trade Commission against the game publisher.

“StarCraft: Remastered is not an entirely new game but an upgraded version of the former StarCraft with improved graphics,” the Internet PC Culture Association, a group that represents internet cafes, said in a press release on Monday. “Most internet cafes have purchased not only the previous StarCraft, but also the expansion package StarCraft: Brood War, and we have concluded that [Blizzard] is charging internet cafes twice with the fee.”

The internet cafes must pay an hourly rate of 250 won ($0.22) to Blizzard for the new game. The old version did not charge an hourly rate. Cafes have to pay the fee even for individual users that purchased the game on their own but choose to play at internet cafes, which the association has called a “double charge.”

The association also claimed that internet cafe owners are being forced to choose between StarCraft: Remastered and the older StarCraft since the company is not allowing cafes to provide both games simultaneously. With most gamers likely to prefer StarCraft: Remastered, owners feel they have no choice but to pick the option that forces them to pay the hourly fee.

“This is nothing but a quintessential act of gapjil [a Korean phrase meaning exploitation of one’s powerful position over others] by Blizzard against the internet cafe industry,” the association said in its statement.

Blizzard refused to comment, saying it was in “no place to provide a detailed explanation on its position.”

The recent scuffle is not the first time that Blizzard has faced complaints from internet cafe owners. The company adopted a fee structure when it released StarCraft II in 2010 and Overwatch last year, and each time, the Internet PC Culture Association protested the policy.

Other Korean game developers like NCSOFT and Nexon have adopted similar fee structures for internet cafes, charging them hourly rates and providing various perks and benefits in return for local gamers using the cafes.

“Owners of internet cafes, an industry that is currently in a slump, will be further burdened with the fees, and the producers in return will rake in a tremendous amount of profit,” a director at the association said.

Those in the gaming industry, though, argue the fee is justified because the partnership with Blizzard brings benefits to the internet cafes. Customers who play StarCraft: Remastered receive various perks like additional experience points that players can use to collect and unlock character portraits, a feature that didn’t exist in the previous version. Players can also use a leaderboard exclusively made for internet cafe users.

“StarCraft has been widely considered a game to be played at internet cafes by fans,” a source in the industry said. “Such a notion, combined with the benefits [that come from paying the fee], will revitalize the internet cafe industry that has been somewhat in a halt during the past few years.”