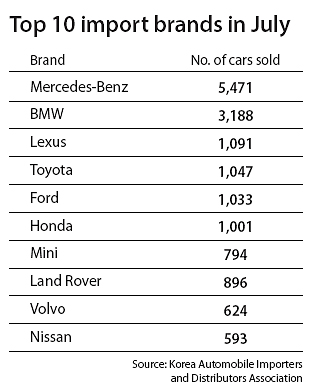 Japanese cars are making a comeback in the Korean market.

After forfeiting their crown to German automakers a decade ago in the wake of Toyota’s massive recall and a strong yen, Japanese manufacturers with their strong hybrid lineups are now pouncing on a gap left by consumer dissatisfaction with diesel-fueled vehicles.

Last month, Japanese cars made up 22.5 percent of Korea’s import market, according to the Korea Automobile Importers and Distributors Association. It’s the first time Japanese imports have made up over a fifth of the market since December 2012.

German automakers, on the other hand, saw their sales fall 2.2 percent year on year, and their market share nose-dived to as low as 50.2 percent, compared to 74.6 percent in September 2015, right before the Volkswagen diesel scandal. Once a strong propeller for German cars’ growth, diesel-fueled vehicles are now weighing on them.

Meanwhile, Japanese companies have spent the past years developing hybrid vehicles, and their efforts are now bearing fruit. Last month saw hybrids’ share of all import vehicles reach an all-time high of 11.2 percent, whereas diesel’s share stood at 43.9 percent, outpaced by gasoline with 44.7 percent.

“Japanese carmakers are reaping benefits from German vehicles losing consumer confidence,” said Lee Ho-geun, a professor of automotive engineering at Daeduk University in Daejeon. “The growth momentum of Japanese vehicles is expected to sustain itself for a while.”

Japanese cars are also rapidly replacing their Korean counterparts in China and the United States. Their market share in China in the first five months of the year, the latest data available, was 17.4 percent, up from 15.5 percent in 2015.

In contrast, Korean automakers made up 4 percent of the Chinese market, a drastic drop from 7.4 percent through all of 2016. Korean products in general have been faring poorly in China, the result of a consumer boycott over a political row between Beijing and Seoul over the deployment of a U.S. missile shield on Korean soil that China believes threatens its security interests.

Even in the United States, where vehicle sales have been stagnant, Japanese cars posted growth. In the first half of 2017, Nissan saw its sales increase 2.8 percent from a year earlier, and Subaru’s revenue shot up 9.1 percent over the same period. Toyota registered 3.6 percent year-on-year growth.

Lee Hang-gu, a researcher at the Korea Institute for Industrial Economics and Trade, a state-run think tank, said Korean automakers may not necessarily feel a sense of crisis because of stable local demand.

“But they have to remind themselves that the Korean auto industry has lost its growth drivers and is running into a crisis,” he said. “They should not only eye emerging markets but also try to sustain their standing in advanced markets, where cutting-edge technologies are in full bloom.”